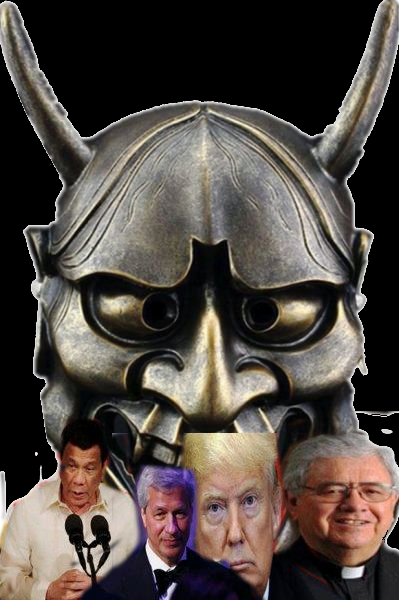 [Intro: Akala (speaking)]
Once upon a time in an obscure part of the Milky Way Galaxy, there was a spinning ball of water and rock ruled by the forces of evil.
The Devil himself, proud of the magnificent achievements of his children, decided to call a special banquet for the greatest thieves in all the land
He sent invites to thousands of the greatest murders, rapists and general-assorted scum, inviting them to attend his palace at the dawn of the new moon. Each thief would be given a chance to stake his claim as the greatest messenger of murder upon the planet, and the Devil himself would then decide who should be crowned king.
After many days of deliberating, all of the petty thieves, such as street criminals, have been found far short of the required level of wickedness and there were just four sets of thieves left in the competition
They were: the monarchs of empire, a cartel of bankers, the heads of religious orders, and the third-world dictators. Each set of thieves appointed a spokesman to give his case to the Devil. We have recorded these events for posterity

[Verse 1 Intro: Akala]
Uh, listen
Uh, okay, yo
First up was the thief of the worst reputation
Dictator of a third-world nation
He looked the Devil in the eye as he spoke
In an oh-so-serious tone

[Verse 1: Akala (as the Third-World Dictator)]
Dear Mr. Devil
I am the greatest thief there has ever been on Earth
Please tell me who else more than me personifies your work
I came to power in a military coup, I murdered the elected president
He wanted to use the resources of our country for our peoples’ benefit
I proved to masters in the west
I could kill my own people just as well as the best
So I took over the so-called independent country when the foreigners left
Sent squads of death to those who would suggest
In power should be the one they elect
Erected a statue of the great man
That raped our mothers, stole our lands
That’s how little self-respect I have
Don’t fight slavery, it makes me glad
Account in Switzerland, Rolls Royce
Murder and rape cos I want new toys
Don’t want a portion, but a whole fortune
With that profit, what’s a little bit of torture
Even outlawed my indigenous culture
And language and history
And taught our people to only worship colonizers
And of course, ME!

[Verse 2 Intro: Akala]
The Devil was so impressed with this wonderful man
He almost ejaculated on his hands
But the monarch of the empire said

[Verse 2: Akala (as the Monarch of Empire)]
Excuse me, Mr. Devil, I’d like to speak if I may
Who do you think trained this amateur dictator to behave this way?
Yeah, I’m sure before I came along his country was far from heaven
But look of the carnage I caused all over the Earth, it’s got to be the work of the Devil
Countless deaths, mass enslavement
Deliberate starvation of whole nations
The dictator tries his best, but looking at me, he’s just an imitation
Who do you think pays his wages?
He would love to be trading places
I’ve been doing this ting on the roads
Way back, way back, way back
Since the Middle Ages
Everybody knows he’s a criminal element
They think I’m democratic and benevolent
And that shows that I’m really devilish
Cos people think I’m heaven-sent
I couldn’t care about democracy
You all know no one elected me
The people love me despite my crimes
Sucka MCs wanna bite my shine
So blingin’ out of control you would vomit
Don’t even touch dough, but my face is on it!

Mr. Devil, allow me to speak
For all of the religious leaders that leech
In the world of creeps, I’m initiated
I take the peoples’ faith and dissipate it
With false promises, hollow oratory
Don’t need a gun, it’s daylight robbery
Dear Mr. Devil
I thought you would like it
How I use their faith in God to keep them blinded
Put on a nice voice, read them a book
And they believe that I am not a crook
Tell them God will repay them in the next
They give me their life savings so I can buy jets
All the reports about child sex
None of us have ever gone to jail yet
This system of stealing, so appealing
Convinces the victims their lives have meaning
Monarchs boast about conquest
But needed my blessings to get it done
And all of the dictators use my books
Therefore, they are just my sons

[Verse 4 Intro: Akala]
The Devil was sure this was the winner
And was just about to put an end to the dinner
But then the man from the banking cartel
Stepped up and said

[Verse 4: Akala (as the Cartel Banker)]
I think I’m the biggest sinner
All of those three depend on me
All they ever do is defending me
Cos I paid for all of the things they have
Of course, and all of the lives they lead
Paid for the guns, bombs and the tanks
That’s why you see, there is always more
I turned science’s basic appliance
Into a client of weapon and war
Paid for monarchies, armed robberies
I make monopolies out of property
Never shot a gun nor killed anyone myself
But billions die cos of me
Who needs a threat? I make a debt
Out of thin air, just sit back and collect
Every single day, whatever they say
The people need me just to connect it
Yet none of them knows what I look like
Yet all of them spend my money to look nice
They want more, no one’s pure
I hold the keys to every single door
Sell sex and drugs, profit and lies
Earth and skies, I’ll even sell life
I’ll even sell freedom for the right price
But no one is smart enough to ask me nice
So Mr. Devil, give me the medal
Don’t be biased
If you don’t give it to me
I’ll just BUY IT!