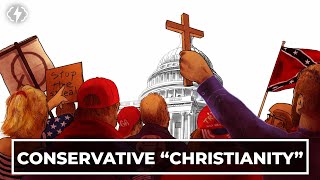 If you live in the United States, odds are you’ve encountered the distinctly American “conservative christian.” It seems that these people, despite their fierce devotion to their faith, have no idea what the Bible actually calls them to do. This short but incisive clip takes look at how christianity was adopted and perverted by the American political Right, and how it differs from the christianity of the early church.