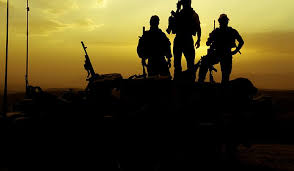 A standing army is a permanent militia maintained in times of peace and war. This film shares an often-untold story and reveals something of which most citizens of the United States are unaware.

For the last one hundred years or so, the US has silently encircled the globe setting up a powerful network of military bases unlike any other in history. Every continent is included in this web. Today, these bases amount to 716 distributed throughout 38 countries with more than 250,000 troops. In addition to this, the US has a presence in 110 countries. Despite the alleged global financial crisis, the military budget keeps growing. Is it possible that crises and military expansion are directly proportional?

During the years of the European conquests, the colony was the unit of the empire. Thus the strongest empires possessed the most colonies. The unit of the American Empire is the military base. World War II marked the birth of this empire because of the growing tension between the Soviet Union and the United States.

Military bases used to serve as simple supply facilities in war-like conflicts, but nowadays they are often formed in the aftermath of US interventions. This begs the question whether this strategy is intentional.

The American bases oversees are seen by many locals as an imposition that not only takes away their land, but also their culture and history. If you live in the US and there’s a military base close to your home, you don’t really mind it much because it’s your base. But if this base were built and operated by a foreign country, it’s a whole different situation because although they try to convey that their presence guarantees peace, both reality and history reveal otherwise.

A case that must not go unmentioned is what happened to the inhabitants of Diego Garcia. The US wanted a base in the Indian Ocean at all cost. So due to an agreement between the UK and the US in 1971, all of Diego Garcia’s 2000 inhabitants were aggressively uprooted, rounded up, and shipped off elsewhere. The Navy called this an operation to ‘sanitize’ the island. Today the exiled men and women continue to fight for their right to return to their home.

The film concludes with the theory upheld by Chalmers Johnson, former CIA advisor. He believes that this new type of imperialism contains a self-destructive recoil force that will lead to a decline and the ruin of the US’s position of power around the world. Watch this thought-provoking documentary now.