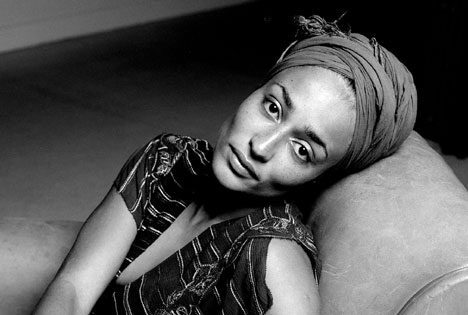 “All the goodness and the heroisms will rise up again, then be cut down again and rise up,” John Steinbeck wrote to his best friend at the peak of WWII. “It isn’t that the evil thing wins — it never will — but that it doesn’t die.”

Caught in the maelstrom of the moment, we forget this cyclical nature of history — history being merely the rosary of moments the future strings of its pasts. We forget that the present always looks different from the inside than it does from the outside — something James Baldwin knew when, in considering why Shakespeare endures, he observed: “It is said that his time was easier than ours, but I doubt it — no time can be easy if one is living through it.” We forget that our particular moment, with all its tribulations and triumphs, is not neatly islanded in the river of time but swept afloat by massive cultural currents that have raged long before it and will rage long after.

I have long believed that critical thinking without hope is cynicism, but hope without critical thinking is naïveté. Where are we to turn for lucid hope, then, in cultural moments that inflame despair, which so easily metastasizes into cynicism? That is what the inimitable Zadie Smith explores in a piece titled “On Optimism and Despair,” originally delivered as an award acceptance speech and later adapted for her altogether fantastic essay collection Feel Free (public library).

Two days after the 2016 American presidential election, Smith — a black Englishwoman living in the freshly sundered United States — was invited to give a speech upon receiving a literary award in Germany. Traveling from a country on the brink of one catastrophic political regime to a country that has survived another, Smith took the opportunity to unmoor the despair of the present from the shallow waters of the cultural moment and cast it into the oceanic context of humanity’s pasts, aswirl with examples and counterexamples of progress, with ideals attained and shattered, with abiding assurance that we shape tomorrow by how we navigate our parallel potentialities for moral ruin and moral redemption today.

Nearly half a century after the German humanistic philosopher Erich Fromm asserted that “optimism is an alienated form of faith, pessimism an alienated form of despair”and a turn of the cycle after Rebecca Solnit contemplated our grounds for hope in dark times, Smith addresses a question frequently posed before her — why her earlier novels are aglow with optimism, while her later writing “tinged with despair” — a question implying that the arc of her body of work inclines toward an admission of the failure of its central animating forces: diversity, multiculturalism, the polyphony of perspectives. With an eye to “what the ancient Greeks did to each other, and the Romans, and the seventeenth-century British, and the nineteenth-century Americans,” Smith offers a corrective that stretches the ahistorical arc of that assumption:

My best friend during my youth — now my husband — is himself from Northern Ireland, an area where people who look absolutely identical to each other, eat the same food, pray to the same God, read the same holy book, wear the same clothes and celebrate the same holidays have yet spent four hundred years at war over a relatively minor doctrinal difference they later allowed to morph into an all-encompassing argument over land, government and national identity. Racial homogeneity is no guarantor of peace, any more than racial heterogeneity is fated to fail.

Echoing the great Czech dissident-turned-president Václav Havel’s reflection on the meaning of human rights in a globalized yet divided world, she adds:

I find these days that a wistful form of time travel has become a persistent political theme, both on the right and on the left. On 10 November The New York Times reported that nearly seven in ten Republicans prefer America as it was in the fifties, a nostalgia of course entirely unavailable to a person like me, for in that period I could not vote, marry my husband, have my children, work in the university I work in, or live in my neighborhood. Time travel is a discretionary art: a pleasure trip for some and a horror story for others. Meanwhile some on the left have time-travel fancies of their own, imagining that the same rigid ideological principles once applied to the matters of workers’ rights, welfare and trade can be applied unchanged to a globalized world of fluid capital.

Smith reframes the question of her shift in literary sensibility not as a decline toward defeatism but as an evolution toward greater complexity and more dimensional awareness of existence:

The art of mid-life is surely always cloudier than the art of youth, as life itself gets cloudier. But it would be disingenuous to pretend it is only that. I am a citizen as well as an individual soul and one of the things citizenship teaches us, over the long stretch, is that there is no perfectibility in human affairs. This fact, still obscure to the twenty-one-year-old, is a little clearer to the woman of forty-one.

In consonance with Austrian-American sociologist Peter Berger’s classic humanistic antidote to cynicism, Smith locates our reasons for optimism by widening the pinhole of the present:

Only the willfully blind can ignore that the history of human existence is simultaneously the history of pain: of brutality, murder, mass extinction, every form of venality and cyclical horror. No land is free of it; no people are without their bloodstain; no tribe entirely innocent. But there is still this redeeming matter of incremental progress. It might look small to those with apocalyptic perspectives, but to she who not so long ago could not vote, or drink from the same water fountain as her fellow citizens, or marry the person she chose, or live in a certain neighborhood, such incremental change feels enormous.

Smith supplements these grounds for hope with a sobering counterpoint to the historical nostalgia so alluring to the hegemony and so ruinous to the rest of us:

Meanwhile the dream of time travel — for new presidents, literary journalists and writers alike — is just that: a dream. And one that only makes sense if the rights and privileges you are accorded currently were accorded to you back then, too. If some white men are more sentimental about history than anyone else right now, it’s no big surprise: their rights and privileges stretch a long way back. For a black woman the expanse of livable history is so much shorter. What would I have been and what would I have done — or more to the point, what would have been done to me — in 1360, in 1760, in 1860, in 1960? I do not say this to claim some pedestal of perfect victimhood or historical innocence. I know very well how my West African ancestors sold and enslaved their tribal cousins and neighbors. I don’t believe in any political or personal identity of pure innocence and absolute rectitude.

But neither do I believe in time travel. I believe in human limitation, not out of any sense of fatalism but out of a learned caution, gleaned from both recent and distant history.

Applying the tenth of her ten rules of writing — “Resign yourself to the lifelong sadness that comes from never ­being satisfied.” — to life itself, Smith adds:

We will never be perfect: that is our limitation. But we can have, and have had, moments in which we can take genuine pride.

Speaking from the German stage, Smith recounts visiting the country during her first European book tour in her early twenties, traveling with her father, who had been there in 1945 as a young soldier in the reconstruction:

We made a funny pair on that tour, I’m sure: a young black girl and her elderly white father, clutching our guidebooks and seeking those spots in Berlin that my father had visited almost fifty years earlier. It is from him that I have inherited both my optimism and my despair, for he had been among the liberators at Belsen and therefore seen the worst this world has to offer, but had, from there, gone forward, with a sufficiently open heart and mind, striding into one failed marriage and then another, marrying both times across various lines of class, color and temperament, and yet still found in life reasons to be cheerful, reasons even for joy.

He was a member of the white working class, a man often afflicted by despair who still managed to retain a core optimism. Perhaps in a different time under different cultural influences living in a different society he would have become one of the rabid old angry white men of whom the present left is so afeared. As it was, born in 1925 and dying in 2006, he saw his children benefit from the civilized postwar protections of free education and free health care, and felt he had many reasons to be grateful.

This is the world I knew. Things have changed, but history is not erased by change, and the examples of the past still hold out new possibilities for all of us, opportunities to remake, for a new generation, the conditions from which we ourselves have benefited… Progress is never permanent, will always be threatened, must be redoubled, restated and reimagined if it is to survive.

In a sentiment that calls to mind Susan Sontag’s insistence on the moral responsibility of the writer and Ursula K. Le Guin’s conviction that “an artist can best speak as a member of a moral community,” Smith concludes by considering the writer’s role as a bastion of collective memory and an instrument of what is most symphonic in human nature:

People who believe in fundamental and irreversible changes in human nature are themselves ahistorical and naive. If novelists know anything it’s that individual citizens are internally plural: they have within them the full range of behavioral possibilities. They are like complex musical scores from which certain melodies can be teased out and others ignored or suppressed, depending, at least in part, on who is doing the conducting. At this moment, all over the world — and most recently in America — the conductors standing in front of this human orchestra have only the meanest and most banal melodies in mind. Here in Germany you will remember these martial songs; they are not a very distant memory. But there is no place on earth where they have not been played at one time or another. Those of us who remember, too, a finer music must try now to play it, and encourage others, if we can, to sing along.

In the remainder of the thoroughly resplendent Feel Free — which includes the fantastic “Find Your Beach” — Smith applies her formidable mind in language to subjects as varied as music, the connection between dancing and writing, climate change, Brexit, the nature of joy, and the confusions of personhood in the age of social media. Complement this particular part with Simone de Beauvoir on moving beyond the simplistic divide of optimism and pessimism, Toni Morrison on the artist’s task through turbulent moments, and Albert Camus on how to strengthen our spirits in difficult times.