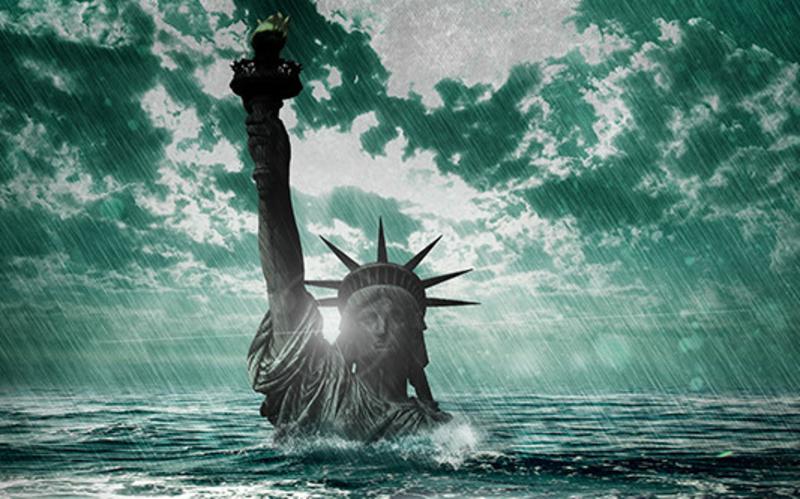 So, the tumult and the shouting–such as it was–dies, the Capitalists and the Cronies depart, still stands this diseased, battered country, reeling in furious confusion, justified outrage, passionate nonsense, and reflex violence as it shifts its focus to the geeks and freaks–the Bearded Lady, Sword Swallower, and Pinhead–who’ll parade their freakish kinks…

No. I can’t do it any more. There’s no zest, no satisfaction, no pride in ridiculing an unmitigated tragedy, and what has happened to America is a tragedy. To make fun, to satirize, to cleverly lampoon it, as if there was a purpose in such ridicule is just too sad, too grim an exercise to justify.

What’s changed? Why won’t the old ways of critiquing our country work any more? It’s because wit, humor, and irony are devices used to impel change for the better. They lose all effect when change is impossible and essential change is no longer conceivable in America.

The root cause is our system–fantasized, mythologized, sacralized–built on injustice, inequity, and engineered privilege, with a profound and tacit hypocrisy that even its purveyors couldn’t comprehend. Our foundation was laid on footings of genocide, slavery and empowered oligarchy and the nation so based and created evolved exactly as it had to do.

The last four years of Trump, has forced into high relief and placed under spotlights, the grotesque falsity and ugliness that our deeply corrupt polity has made hallmarks of our failed state. Yet these years of the Trump Era have altered nothing significant about us, nor have they deviated from the dark, sinister character of our notorious history. Their dull, dense and banal evil were the inevitable result of decades of raw crime that went before.

What they have done–in their bald vulgarity, in their gallumphing, puerile hubris, their refusal to mask our historic amorality with fulsome, exculpatory rhetoric and paeans of high spiritual purpose–is to advertise in grisly detail the vacuous arrogance, blatant cruelty, bottomless avarice, and brazen, bullying aggression that has insulted, violated, and alienated the world.

It is psychological fact that when the gap yawns too wide between what is asserted and reality, when a description clearly no longer matches an object, when what is said bears no relation to what is experienced, then the faith they’re intended to bolster evaporates and is gone. This is what has happened in America. From our beginning, our Exceptionalist mythology, with its heroic gospel, its philosophical poetry and gorgeous, vital imagery had kept its iron lock on the minds and hearts of a vast majority of us. It has taken only one lifetime for it to be exposed, decoded, and sprung.

Americans, long taught that they were a superior people in the most just, honorable, wise, heroic nation on earth have had their faith battered and broken, gradually, against their will, by decades of crime and folly, with each new outrage and imbecility hard-sold to them as what it was not: an action of the most heroic humane kind, for the most admirable of motives.

Perfected in World Wars I and II, sustained with difficulty in Korea, it began to rapidly unravel in Vietnam, and the blatant, bloody fiascos of Aghanistan, Iraq, Libya, Syria and–diplomatically–Iran, have proven the myth a maudlin yarn of bathetic fiction. Only ignorant, blind, propagandized boobs and kooky xenophobes still cling to the gory fairy tale of Exceptionalism and the dirty joke of America’s purity and nobility it trumpeted to the world.

Concurrent with the bloody amorality of America all over the earth, as our government partnered with and coddled dozens of the most brutal, vile, murderous maniacs ever to live, arming their police states, death squads, torture regimes, and mercenary jihadis, the myth was used to hoodwink and impoverish the great bulk of innocents at home who supported it.

For generations the economic security of working people has been actively undermined and their wages eroded by their own corporate government. They were told there was no money for social well-being as they watched a tiny clique of titans of finance enrich itself beyond imagination, and obscene “defense” budgets milk billions via government fiat for the War Machine to kill millions of peasant “enemies” in places they couldn’t find on a map.

Deception and murder overseas; fraud and crushing punishment at home: these are the filthy realities the grotesque fairy tale so long and diligently concealed from us. That horror is ended. It’s deep, fatal effects are not.

The greatest peril to a state occurs when its people no longer believe that it represents them. When that faith fails, as it did in Periclean Athens, in late imperial Rome, Republican Spain, and Weimar Germany, state machinery seizes up, its authority dissolves, and there is war in the streets. That we are nearing such a point is made obvious by the bitter polarity and violent opposition between Trump and anti-Trump factions, but also in a deeper, more dangerous division between the tyrannical, wealthy oligarchy that owns the country and demands endless war and American hegemony, and the great majority that lives as economic victims of that insane ruling clique.

Now, faced with by far the most ominous sociopolitical disfunction of our modern history, and with the overlay of the unknown destructive potential of Coronavirus and the certainty of inexorable climate catastrophe already evident, we are given the Presidential election of 2020, hyped to the max by solemn, phony politicians and hysterical media flacks, packaged as if it addressed, in any way, the interlocking complex of impending disasters.

The absurdist commedia del arte of two old, ridiculously inept, and grossly impaired buffoons heading two sick cadres of leased political whores who jointly serve the .0001%, is the memento mori of America. Regardless of the outcome of this sorry farce, the end of the country in any recognizable form will be accelerated, fast tracked to implosion.

As in any natural process, disintegration will not be sudden or immediate. Dissolution may take as long as creation. As it proceeds, Americans will suffer and their suffering will be intense, acute and inescapable. They will grope and grasp for answers, remedies, fixes, and find none. They have been schooled that all problems have solutions and can be overcome. It is not so. Their myth deceived them.

The end of Rome ushered in a thousand years of darkness in Europe and nothing could prevent it but precedents are meaningless. Modern countries and cultures do not disappear in failure or even war, nor do entire peoples. Matter, says science, is neither created nor destroyed. When a great nation fails and falls apart, there remains the eternal resilience of the life force, which is unending. That force will always be with us.