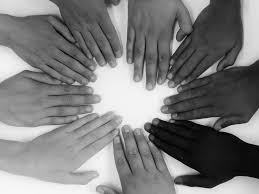 “Love is the only way to rescue humanity from all ills,” Leo Tolstoy wrote to Mahatma Gandhi in the stirring correspondence that would unspool over four decades until Gandhi’s assassination in 1948. By then, Gandhi had been nominated for the Nobel Peace Prize five times, including days before his death. That year, the Nobel Committee awarded all other disciplines except the Peace Prize, for which they found “no suitable living candidate.”

On December 10, 1948 — the day of the Nobel ceremony in Stockholm — the United Nations General Assembly gathered in Paris to adopt the most visionary, idealistic, and poetic document ever composed: The Universal Declaration of Human Rights. A pioneering effort to standardize the raising of conscience, kindness, and reason above self-interest and the hunger for power, it was the culmination of two years of systematic refinement by a global drafting committee of eight men from five continents, chaired by Eleanor Roosevelt (October 11, 1884–November 7, 1962), with her floral dresses and her “spine as stiff as the steel girder of a skyscraper.”

Roosevelt’s nomination as a U.N. delegate had had to pass through the United States Senate for approval, where she suspected certain conservative Senators would disapprove — “because of my attitude toward social problems,” she later reflected, “and especially youth problems.” But her nomination was heartily approved — only one Senator voted against her, citing her troublesome devotion to racial equality.

Shortly before her U.N. nomination and shortly after the end of WWII, Roosevelt — another indefensible blind spot in the Nobel Commission’s dispensation of the Peace Prize — had lost her husband. In the thick of her bereavement, she wrote in her daybook:

When you have lived for a long time in close contact with the loss and grief which today pervades the world, any personal sorrow seems to be lost in the general sadness of humanity.

She coped by pouring her indefatigable energy into drafting this buoyant document aimed at protecting human beings from the sorrows they inflict upon one another. Later, she would look back on her life with the unwavering conviction that “in the long run there is no more liberating, no more exhilarating experience than to determine one’s position, state it bravely, and then act boldly.” Now, she was tasked with creating the blueprint for bold action toward justice, contoured with bravely stated words.

She insisted that the document be adopted as a declaration rather than as a treaty, hoping this would confer upon it the inspiriting power to do for the world what the Declaration of Independence had done for her homeland. And so it did: Despite the abiding challenge of our species — the unhandsome fact that there is no universal utopia and that all utopias are built on someone’s subjugation-bent back — the document that emerged became a beacon of justice for generations to come, founded upon the conviction that a “recognition of the inherent dignity and of the equal and inalienable rights of all members of the human family is the foundation of freedom, justice and peace in the world,” radiating Maya Angelou’s stunning lyric insistence that “we are the possible, we are the miraculous, the true wonder of this world.”

Translated into more than 500 languages, making it the world’s most translated document, the UDHR went on to shape myriad national and international laws, inspire the constitutions of various newborn countries, and furnish the legal definitions of “fundamental freedoms” and “human rights.” Buried into the language of the document is also a landmark unsexing of man as the universal pronoun (though it would take many more decades to seep into culture) — the trailblazing Indian activist, writer, and feminist Hansa Jivraj Mehta suggested replacing “all men are equal” with “all are equal.”

Today, as we come to see ourselves as Angelou saw us — creatures “whose hands can strike with such abandon that in a twinkling, life is sapped from the living yet those same hands can touch with such healing, irresistible tenderness” — some of the articles in the declaration read both as chilling indictments of where we have fallen short and as a defiantly aspirational blueprint for where we can and must go as we rise to our highest human potential.

Article 3: Everyone has the right to life, liberty and security of person.

Article 5: No one shall be subjected to torture or to cruel, inhuman or degrading treatment or punishment.

Two generations after the adoption of the Universal Declaration of Human Rights, composer Max Richter honors its legacy and reimagines its spirit for a world more diverse and equitable than even the document’s idealistic creators imagined. (I have noted elsewhere that even the farthest seers can’t bend their gaze beyond their era’s horizon of possibility; but the horizon shifts with each incremental revolution as the human mind peers outward to take in nature, then turns inward to question its own givens.)

In a stunning piece titled “All Human Beings,” part of his record Voices — a soulful sonic landscape of thought and feeling, powerfully transportive yet grounding, a decade in the making — Richter builds a sonic bower of piano, violin, soprano, and choir around a 1949 recording of Eleanor Roosevelt reading the UDHR. It begins with Roosevelt’s voice, then passes the generational and cultural baton to Kiki Layne, who continues reading in English before morphing into a crowdsourced choral reading in multiple languages by human beings all over the world.

Richter reflects on the project:

I like the idea of a piece of music as a place to think, and it is clear we all have some thinking to do at the moment. We live in a hugely challenging time and, looking around at the world we have made, it’s easy to feel hopeless or angry. But, just as the problems we face are of our own making, so their solutions are within our reach, and the Universal Declaration of Human Rights is something that offers us a way forward. Although it isn’t a perfect document, the declaration does represent an inspiring vision for the possibility of better and kinder world.