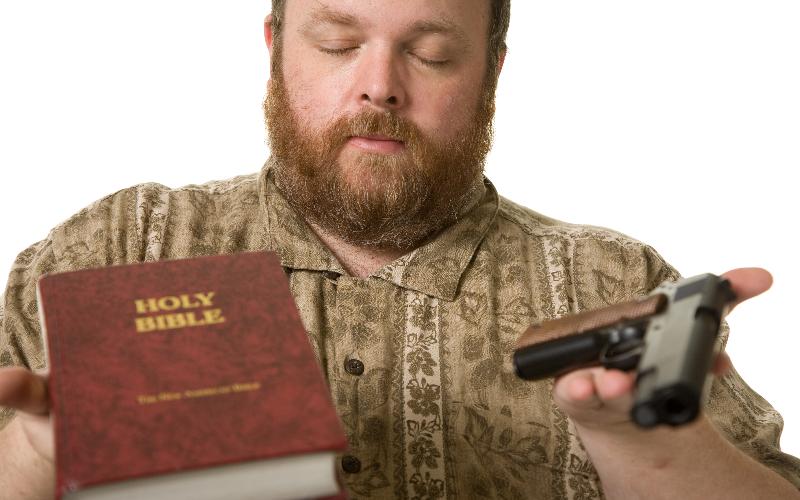 The proliferation of guns in American society is not only profitable for gun manufacturers, it fools the disempowered into fetishizing weapons as a guarantor of political agency. Guns buttress the myth of a rugged individualism that atomizes Americans, disdains organization and obliterates community, compounding powerlessness. Gun ownership in the United States, largely criminalized for poor people of color, is a potent tool of oppression. It does not protect us from tyranny. It is an instrument of tyranny.

“Second Amendment cultists truly believe that guns are political power,” writes Mark Ames, the author of “Going Postal: Rage, Murder, and Rebellion: From Reagan’s Workplaces to Clinton’s Columbine and Beyond.” “[They believe that] guns in fact are the only source of political power. That’s why, despite loving guns, and despite being so right-wing, they betray such a paranoid fear and hatred of armed agents of the government (minus Border Guards, they all tend to love our Border Guards). If you think guns, rather than concentrated wealth, equals political power, then you’d resent government power far more than you’d resent billionaires’ power or corporations’ hyper-concentrated wealth/power, because government will always have more and bigger guns. In fact you’d see pro-gun, anti-government billionaires like the Kochs as your natural political allies in your gun-centric notion of political struggle against the concentrated gun power of government.”

American violence has always been primarily vigilante violence. It is a product of the colonial militias; the U.S. Army, which carried out campaigns of genocide against Native Americans; slave patrols; hired mercenaries and gunslingers; the Pinkerton and Baldwin-Felts detective agencies; gangs of strikebreakers; the Iron and Coal Police; company militias; the American Legion veterans of World War I who attacked union agitators; the White Citizens’ Council; the White League, the Knights of the White Camellia; and the Ku Klux Klan, which controlled some states. These vigilante groups carried out atrocities, mostly against people of color and radicals, within our borders that later characterized our savage subjugation of the Philippines, interventions in Latin America, the wars in Korea and Vietnam and our current debacles in the Middle East. Gen. Jacob H. Smith summed up American attitudes about wholesale violence in the Philippines when he ordered his troops to turn the island of Samar, defended by Filipino insurgents, into “a howling wilderness.”

Mass culture and most historians do not acknowledge the patterns of violence that have played out over and over since the founding of the nation. This historical amnesia blinds us to the endemic violence that defines our culture and is encoded in our national myth. As historian Richard Slotkinwrites in “Regeneration Through Violence: The Mythology of the American Frontier 1600-1860,” the first of his three magisterial works on violence in American society, our Jacksonian form of democracy was defined by “the western man-on-the-make, the speculator, and the wildcat banker; [in a time] when racist irrationalism and a falsely conceived economics prolonged and intensified slavery in the teeth of American democratic idealism; and when men like Davy Crockett became national heroes by defining national aspirations in terms of so many bears destroyed, so much land preempted, so many trees hacked down, so many Indians and Mexicans dead in the dust.”

“The first colonists saw in America an opportunity to regenerate their fortunes, their spirits, and the power of their church and nation,” he writes, “but the means to that regeneration ultimately became the means of violence, and the myth of regeneration through violence became the structuring metaphor of the American experience.”

“A people unaware of its myths is likely to continue living by them, though the world around that people may change and demand changes in their psychology, their ethics and their institutions,” Slotkin writes.

The metaphors we use to describe ourselves to ourselves are rooted in this national myth. We explain our history and our experience and seek our identity in this myth. This myth connects us to the forces that shape and give meaning to our lives. It bridges, as Slotkin writes, “the gap between the world of the mind and the world of affairs, between dream and reality, between impulse or desire and action. It draws on the content of individual and collective memory, structures it, and develops it from imperatives for belief and action.”

The historian Roxanne Dunbar-Ortiz in her book “Loaded: A Disarming History of the Second Amendment” also illustrates how the racist, white settler vision of the world continues to color our perception of reality. She writes:

The populist frontier ideology has served the U.S. ruling class well for its entire history and once again found tremendous resonance in the Vietnam War as another Indian war. A key to John F. Kennedy’s political success was that he revived the “frontier” as a trope of populist imperialism, speaking of the “settling” of the continent and “taming” a different sort of “wilderness.” In Kennedy’s acceptance speech in Los Angeles at the 1960 Democratic Convention, he said: “I stand tonight facing west on what was once the last frontier. From the lands that stretch 3,000 miles behind me, the pioneers of old gave up their safety, their comfort and sometimes their lives to build a new world here in the West. … We stand today on the edge of a new frontier.” The metaphor described Kennedy’s plan for employing political power to make the world the new frontier of the United States. Central to this vision was the Cold War, what Richard Slotkin calls “a heroic engagement in the ‘long twilight struggle’ against communism,” to which the nation was summoned by Kennedy in his inaugural address. Soon after he took office, that struggle took the form of the counterinsurgency program in Vietnam and his creation of the Green Beret Special Forces. “Seven years after Kennedy’s nomination,” Slotkin reminds us, “American troops would be describing Vietnam as ‘Indian Country’ and search-and-destroy missions as a game of ‘Cowboys and Indians’; and Kennedy’s ambassador to Vietnam would justify a massive military escalation by citing the necessity of moving the ‘Indians’ away from the ‘fort’ so that the ‘settlers’ could plant ‘corn.’ ”

The gun culture permits a dispossessed public, sheared of economic and political power, to buy a firearm and revel in feelings of omnipotence. A gun reminds Americans that they are divine agents of purification, anointed by God and Western civilization to remake the world in their own image. Violence in America is not about the defense of liberty or radical change. It is an expression of domination, racism and hate. American vigilantes are the shock troops of capitalism. They butcher the weak on behalf of the strong. “The essential American soul is hard, isolate, stoic, and a killer,” the English novelist and essayist D.H. Lawrence wrote. “It has never yet melted.”

There are some 310 million firearms in the United States, including 114 million handguns, 110 million rifles and 86 million shotguns. The number of military-style assault weapons in private hands—including the AR-15 semi-automatic rifles used in the massacres at Marjory Stoneman Douglas High School in Parkland, Fla., and at the Sandy Hook Elementary School in Newtown, Conn.—is estimated at 1.5 million. The United States has the highest rate of gun ownership in the world, an average of 90 firearms per 100 people.

“Total gun deaths in the United States average around 37,000 a year, with two-thirds of those deaths being suicides, leaving approximately 12,000 homicides, a thousand of those at the hands of the police,” writes Dunbar-Ortiz. “Mass shootings—ones that leave four or more people wounded or dead—now occur in the United States, on average, at the pace of one or more per day. Disturbing as that fact is, mass shootings currently account for only 2 percent of gun killings annually. The number of gun deaths—37,000—is roughly equal to death-by-vehicle incidents in the United States per year.”

If the ruling elites feared an armed uprising, a draconian form of gun control would instantly be law. But the engine of gun ownership is not the fear of government. It is the fear by white people of the black and brown underclass, an underclass many whites are convinced will threaten them as society breaks down. Guns, largely in the hands of whites, have rarely been deployed against the state. In this, the United States is an exception. It has a heavily armed population and yet maintains political stability. The few armed rebellions—the 1786 and 1787 Shays’ Rebellion, the 1921 armed uprising by 10,000 coal miners at Blair Mountain in West Virginia—were swiftly and brutally put down by militias and armed vigilantes hired by capitalists. These uprisings were about specific grievances, not systemic change. Revolution is foreign to our intellectual tradition.

As jobs and manufacturing are shipped overseas, communities crumble, despair grips much of the country and chronic poverty plagues American families, the gun seems to be the last tangible relic of a free and mythic America. It offers the illusion of power, protection and freedom. This is why the powerless will not give it up.

“In the heartland, these are people who feel they’ve been the victims of sustained economic violence at the hands of tyrannical governments of both parties,” writer and editor Daniel Hayes wrote in The New York Times in 2016. “In 2008, Barack Obama’s notorious misstep got one thing right: Rural people will ‘cling’ to guns. Not because they are sad or misguided, but because it is the last right they feel they still have: a liberty at least, in place of opportunity.”

“Outsourcing and guns: These are the twin issues animating Trump voters in rural Kentucky,” he wrote. “The two are linked and feed off each other; the only difference between them is that white rural voters see outsourcing as a losing battle, whereas protecting and expanding Second Amendment rights is the only policy they’ve been able to get politicians to move on. For that reason alone, it is totemic.”

The Second Amendment, as Dunbar-Ortiz makes clear in her book, was never about protecting individual freedom. It was about codifying white vigilante violence into law.

“The elephant in the room in these debates has long been what the armed militias of the Second Amendment were to be used for,” Dunbar-Ortiz writes. “The kind of militias and gun rights of the Second Amendment had long existed in the colonies and were expected to continue fulfilling two primary roles in the United States: destroying Native communities in the armed march to possess the continent, and brutally subjugating the enslaved African population. …”

Attacks on the gun culture and the gun violence that plagues the nation are seen by many gun owners as an attack on their national identity. The more powerful the weapon, the more powerful the gun owner feels. There are those among the marginalized and enraged who are tempted, especially because of easy access to assault-style weapons, to use their guns in mass killings to cleanse the world. The lone killer, almost always a white male, is celebrated by Hollywood and in our national myth and “frontier psychology.” This peculiar American veneration of violence, Slotkin writes, “reaches out of the past to cripple, incapacitate, or strike down the living.”