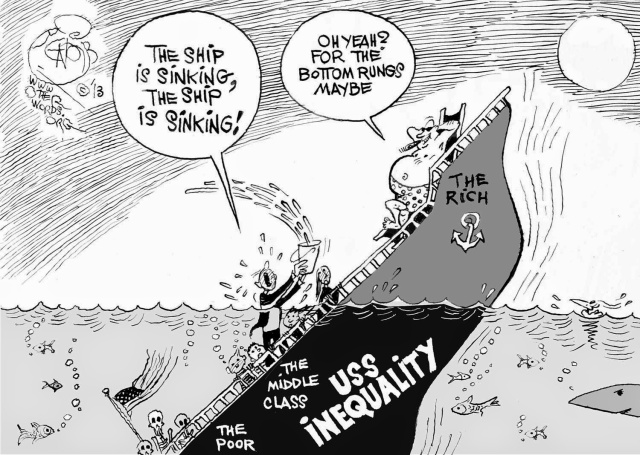 Sometimes reading the statistics on income/wealth inequality in the US is like reading a tale from Edgar Allen Poe or Dante Alighieri – it’s absolutely horrific. The numbers oftentimes highlight the ruinous effects of inequality & reveal how a scant few are able to get away with this broad day-light robbery. To add insult to injury, the poorest are often made to feel that they are the liars, & cheaters who are hell-bent on milking the society dry. Below are some numbers that most talking heads would much rather sweep under the rug to keep the game going. (These stats were taken from an article I read on Reddit. I made some tweaks by hyperlinking to relevant sources & adding a few personal remarks):

1. Only 3% of the very rich are entrepreneurs.

According to both Marketwatch and economist Edward Wolff, over 90 percent of the assets owned by millionaires are held in a combination of low-risk investments (bonds and cash), personal business accounts, the stock market, and real estate. Only 3.6 percent of taxpayers in the top .1% were classified as entrepreneurs based on 2004 tax returns. A 2009 Kauffman Foundation study found that the great majority of entrepreneurs come from middle-class backgrounds, with less than 1 percent of all entrepreneurs coming from very rich or very poor backgrounds.

2. Only FOUR OUT OF 150 countries have more wealth inequality than us.

Many people still believe that the US us the most egalitarian nation on Earth. Trust me – I’ve argued with many blindfolded patriots who buy into this myth. The truth is, the U.S. has greater wealth inequality than every measured country in the world except for Namibia, Zimbabwe, Denmark, and Switzerland.

3. An amount equal to ONE-HALF the GDP is held untaxed overseas by rich Americans.

Talking heads chatter on & on about what should be eliminated, taxed, tweaked, etc, but it is almost always the average citizen who has to take the hit. The Tax Justice Network estimated that between $21 and $32 trillion is hidden offshore, untaxed. With Americans making up 40% of the world’s Ultra High Net Worth Individuals, that’s $8 to $12 trillion in U.S. money stashed in far-off hiding places. Based on a historical stock market return of 6%, up to $750 billion of income is lost to the U.S. every year, resulting in a tax loss of about $260 billion.

4. Corporations stopped paying HALF OF THEIR TAXES after the recession.

After paying an average of 22.5% from 1987 to 2008, corporations have paid an annual rate of 10% since. This represents a sudden $250 billion annual loss in taxes. U.S. corporations have shown a pattern of tax reluctance for more than 50 years, despite building their businesses with American research and infrastructure. They’ve passed the responsibility on to their workers. For every dollar of workers’ payroll tax paid in the 1950s, corporations paid three dollars. Now it’s 22 cents…22 cents!!

5. Just TEN Americans made a total of FIFTY BILLION DOLLARS in one year.

That’s enough to pay the salaries of over a million nurses or teachers or emergency responders.
That’s enough, according to 2008 estimates by the Food and Agriculture Organization and the UN’s World Food Program, to feed the 870 million people in the world who are lacking sufficient food.
For the free-market advocates who say “they’ve earned it”: Point #1 above makes it clear how the wealthy make their money.

6. Tax deductions for the rich could pay off 100 PERCENT of the deficit.

Another stat that required a double-check. Based on research by the Tax Policy Center, tax deferrals and deductions and other forms of tax expenditures (tax subsidies from special deductions, exemptions, exclusions, credits, capital gains, and loopholes), which largely benefit the rich, are worth about 7.4% of the GDP, or about $1.1 trillion. Other sources have estimated that about two-thirds of the annual $850 billion in tax expenditures goes to the top quintile of taxpayers.

7. The average single black or Hispanic woman has about $100 IN NET WORTH.

The Insight Center for Community Economic Development reported that median wealth for black and Hispanic women is a little over $100. That’s much less than one percent of the median wealth for single white women ($41,500). Other studies confirm the racially-charged economic inequality in our country. For every dollar of NON-HOME wealth owned by white families, people of color have only one cent…yes, you read it right – one cent!

8. Elderly and disabled food stamp recipients get $4.30 A DAY FOR FOOD.

When you listen to some people rant about the leaches that suck the economy dry, they’re not talking about rich folks. They think that the welfare state is pouring money & resources into the laps of the indigent. The fact is, Temporary Assistance for Needy Families (TANF) has dropped significantly over the past 15 years, serving only about a quarter of the families in poverty, and paying less than $400 per month for a family of three for housing and other necessities. Ninety percent of the available benefits go to the elderly, the disabled, or working households. Food stamp recipients get $4.30 a day.

9. Young adults have lost TWO-THIRDS OF THEIR NET WORTH since 1984.

10. The American public paid about FOUR TRILLION DOLLARS to bail out the banks.

That’s about the same amount of money made by America’s richest 10% in one year. But we all paid for the bailout. And because of it, we lost the opportunity for jobs, mortgage relief, and educational funding. Bonus for the super-rich: A QUADRILLION DOLLARS in securities trading nets ZERO sales tax revenue for the U.S. The world derivatives market is estimated to be worth over a quadrillion dollars (a thousand trillion). At least $200 trillion of that is in the United States. In 2011 the Chicago Mercantile Exchange reported a trading volume of over $1 quadrillion on 3.4 billion annual contracts. A quadrillion dollars. A sales tax of ONE-TENTH OF A PENNY on a quadrillion dollars could pay off the deficit. But the total sales tax was ZERO.

It’s not surprising that the very rich (and their spineless defenders) would like to fudge the numbers, as they have the nation.