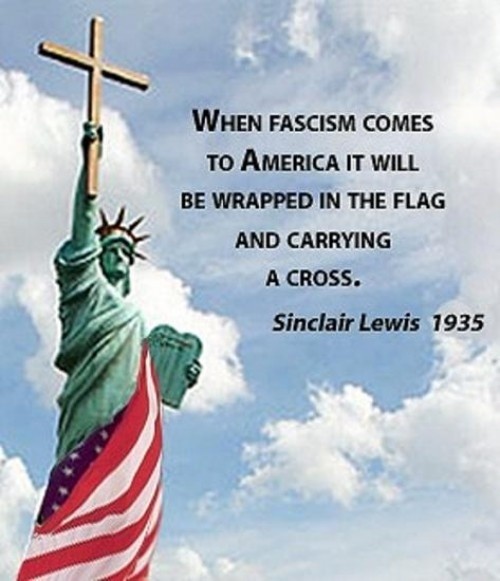 The greatest moral failing of the liberal Christian church was its refusal, justified in the name of tolerance and dialogue, to denounce the followers of the Christian right as heretics. By tolerating the intolerant it ceded religious legitimacy to an array of con artists, charlatans and demagogues and their cultish supporters. It stood by as the core Gospel message—concern for the poor and the oppressed—was perverted into a magical world where God and Jesus showered believers with material wealth and power. The white race, especially in the United States, became God’s chosen agent. Imperialism and war became divine instruments for purging the world of infidels and barbarians, evil itself. Capitalism, because God blessed the righteous with wealth and power and condemned the immoral to poverty and suffering, became shorn of its inherent cruelty and exploitation. The iconography and symbols of American nationalism became intertwined with the iconography and symbols of the Christian faith. The mega-pastors, narcissists who rule despotic, cult-like fiefdoms, make millions of dollars by using this heretical belief system to prey on the mounting despair and desperation of their congregations, victims of neoliberalism and deindustrialization. These believers find in Donald Trump a reflection of themselves, a champion of the unfettered greed, cult of masculinity, lust for violence, white supremacy, bigotry, American chauvinism, religious intolerance, anger, racism and conspiracy theories that define the central beliefs of the Christian right. When I wrote “American Fascists: The Christian Right and the War on America” I was deadly serious about the term “fascists.”

The evangelical magazine Christianity Today, by stating the obvious about Trump, that he is immoral and should be removed from office, became the latest recipient of the Christian right’s vicious and hypocritical backlash. Nearly 200 evangelical leaders, including former Arkansas Gov. Mike Huckabee, former Rep. Michele Bachmann, Jerry Falwell Jr. and Ralph Reed, signed a joint letter denouncing the Christianity Today editorial, written by the magazine’s president, Timothy Dalrymple, and outgoing Editor Mark Galli. Evangelical Christians who criticize Trump are as swiftly disappeared from the ranks as Republican politicians who criticize Trump. Trump received 80% of the white evangelical vote in the 2016 presidential election, and in a poll this month 90% of Republicans said they opposed impeachment and ouster of the president. Among Republicans who identify as white evangelical Protestants, that number rises to 99%.

Tens of millions of Americans live hermetically sealed inside the vast media and educational edifice controlled by Christian fascists. In this world, miracles are real, Satan, allied with secular humanists and Muslims, is seeking to destroy America, and Trump is God’s anointed vessel to build the Christian nation and cement into place a government that instills “biblical values.” These “biblical values” include banning abortion, protecting the traditional family, turning the Ten Commandments into secular law, crushing “infidels,” especially Muslims, indoctrinating children in schools with “biblical” teachings and thwarting sexual license, which includes any sexual relationship other than in a marriage between a man and a woman. Trump is routinely compared by evangelical leaders to the biblical king Cyrus, who rebuilt the temple in Jerusalem and restored the Jews to the city.

Trump has filled his own ideological void with Christian fascism. He has elevated members of the Christian right to prominent positions, including Mike Pence to the vice presidency, Mike Pompeo to secretary of state, Betsy DeVos to secretary of education, Ben Carson to secretary of housing and urban development, William Barr to attorney general, Neil Gorsuch and Brett Kavanaugh to the Supreme Court and the televangelist Paula White to his Faith and Opportunities Initiative. More importantly, Trump has handed the Christian right veto and appointment power over key positions in government, especially in the federal courts. He has installed 133 district court judges out of 677 total, 50 appeals court judges out of 179 total, and two U.S. Supreme Court justices out of nine. Almost all of these judges were, in effect, selected by the Federalist Society and the Christian right. Many of the extremists who make up the judicial appointees have been rated as unqualified by the American Bar Association, the country’s largest nonpartisan coalition of lawyers. Trump has moved to ban Muslim immigrants and rolled back civil rights legislation. He has made war on reproductive rights by restricting abortion and defunding Planned Parenthood. He has stripped away LGBTQ rights. He has ripped down the firewall between church and state by revoking the Johnson Amendment, which prohibits churches, which are tax-exempt, from endorsing political candidates. His appointees throughout the government routinely use biblical strictures to justify an array of policy decisions including environmental deregulation, war, tax cuts and the replacement of public schools with charter schools, an action that permits the transfer of federal education funds to private “Christian” schools.

I studied ethics at Harvard Divinity School with James Luther Adams, who had been in Germany in 1935 and 1936. Adams witnessed the rise there of the so-called Christian Church, which was pro-Nazi. He warned us about the disturbing parallels between the German Christian Church and the Christian right. Adolf Hitler was in the eyes of the German Christian Church a volk messiah and an instrument of God—a view similar to the one held today about Trump by many of his white evangelical supporters. Those demonized for Germany’s economic collapse, especially Jews and communists, were agents of Satan. Fascism, Adams told us, always cloaked itself in a nation’s most cherished symbols and rhetoric. Fascism would come to America not in the guise of stiff-armed, marching brownshirts and Nazi swastikas but in mass recitations of the Pledge of Allegiance, the biblical sanctification of the state and the sacralization of American militarism. Adams was the first person I heard label the extremists of the Christian right as fascists. Liberals, he warned, as in Nazi Germany, were blind to the tragic dimension of history and radical evil. They would not react until it was too late.

Trump’s legacy will be the empowerment of the Christian fascists. They are what comes next. For decades they have been organizing to take power. They have built infrastructures and organizations, including lobbying groups, schools and universities as well as media platforms, to prepare. They have seeded their cadre into the political system. We on the left, meanwhile, have seen our institutions and organizations destroyed or corrupted by corporate power.

The Christian fascists, as in all totalitarian movements, need a crisis, manufactured or real, in order to seize power. This crisis may be financial. It could be triggered by a catastrophic terrorist attack. Or it could be the result of a societal breakdown from our climate emergency. The Christian fascists are poised to take advantage of the chaos, or perceived chaos. They have their own version of the brownshirts, the for-hire mercenary armies and private contractors amassed by Christian fascists such as Erik Prince, the brother of Betsy DeVos. The Christian fascists have seized control of significant portions of the judiciary and legislative branches of government. FRC Action, the legislative affiliate of the Family Research Council, gives 245 members of Congress a perfect 100% for votes that support the agenda of the Christian right. The Family Research Council, which has called on its followers to pray that God will vanquish the “demonic forces” behind Trump’s impeachment, is identified by the Southern Poverty Law Center as a hate group because of its campaigns to discriminate against the LGBTQ community.

The ideology of the Christian fascists panders in our decline to the primitive yearnings for the vengeance, new glory and moral renewal that are found among those pushed aside by deindustrialization and austerity. Reason, facts and verifiable truth are impotent weapons against this belief system. The Christian right is a “crisis cult.” Crisis cults arise in most collapsing societies. They promise, through magic, to recover the lost grandeur and power of a mythologized past. This magical thinking banishes doubt, anxiety and feelings of disempowerment. Traditional social hierarchies and rules, including an unapologetic white, male supremacy, will be restored. Rituals and behaviors including an unquestioning submission to authority and acts of violence to cleanse the society of evil will vanquish malevolent forces.

The Christian fascists propagate their magical thinking through a selective literalism in addressing the Bible. They hold up as sacrosanct biblical passages that buttress their ideology and ignore, or grossly misinterpret, the ones that do not. They live in a binary universe. They see themselves as eternal victims, oppressed by dark and sinister groups seeking their annihilation. They alone know the will of God. They alone can fulfill God’s will. They seek total cultural and political domination. The secular, reality-based world, one where Satan, miracles, destiny, angels and magic do not exist, destroyed their lives and communities. That world took away their jobs and their futures. It ripped apart the social bonds that once gave them purpose, dignity and hope. In their despair they often struggled with alcohol, drug and gambling addictions. They endured familial breakdown, divorce, evictions, unemployment and domestic and sexual violence. The only thing that saved them was their conversion, the realization that God had a plan for them and would protect them. These believers were pushed by a callous, heartless corporate society and rapacious oligarchy into the arms of charlatans. All who speak to them in the calm, rational language of fact and evidence are hated and ultimately feared, for they seek to force believers back into “the culture of death” that nearly destroyed them.

We can blunt the rise of this Christian fascism only by reintegrating exploited and abused Americans into society, giving them jobs with stable, sustainable incomes, relieving their crushing personal debts, rebuilding their communities and transforming our failed democracy into one in which everyone has agency and a voice. We must impart to them hope, not only for themselves but for their children.

Christian fascism is an emotional life raft for tens of millions. It is impervious to the education, dialogue and discourse the liberal class naively believes can blunt or domesticate the movement. The Christian fascists, by choice, have severed themselves from rational thought. We will not placate or disarm this movement, bent on our destruction, by attempting to claim that we too have Christian “values.” This appeal only strengthens the legitimacy of the Christian fascists and weakens our own.