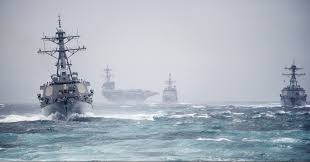 Abby Martin debunks the notion that Trump is an anti-interventionist president, outlining his first two years of aggressive foreign policy that has expanded US wars and occupations. From the biggest military budget in history, to removing its restrictions to “bomb the hell out of” Iraq and Syria, to ramping-up brutal economic sanctions, to becoming America’s ‘Arms Salesman-In-Chief.’