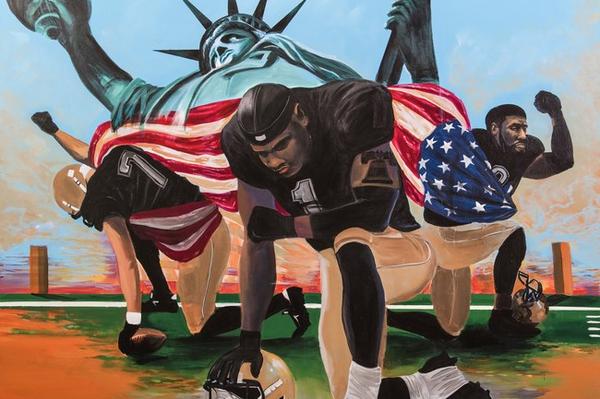 This history-making black Major League Baseball player called out race prejudice in all sectors of American society including prejudice practiced by U.S. presidents, lawmakers, law enforcers and others.

This player’s poignant observations about the sinews of the prejudice infecting American society focus antiseptic illumination on toxic stances taken by President Trump on the rights of black pro-football players to protest race-based injustices including police brutality.

Interestingly, this player’s critique of patriotism shares some similarities with a stance taken by U.S. Senator John McCain, a man widely respected for his Vietnam War service — the service that President Trump has repeatedly disparaged because McCain ended up a POW after his plane was shot down over North Vietnam.

In May 2015 McCain issued a report that slammed the U.S. Department of Defense for funneling millions to pro sports leagues to conduct patriotism inspiring events during games. NFL players standing for the national anthem, now the center of controversy between Trump and some NFL players arose largely from that DoD funding that McCain railed against in the report “Tackling Paid Patriotism.”

This history-making black Major League Baseball player is not Jackie Robinson, the legendary figure who broke the no-blacks-in-MLB barrier in 1947 with his play for the Brooklyn Dodgers.

Prejudice ran so deep in the all-white MLB that in 1945 one pro team fielded a player who only had one arm, refusing to retain any of the phenomenal players of the all-black Negro leagues who were as good as and better than the best MLB players.

Walker, a University of Michigan graduate, was the first and only black to play in Major League Baseball in the 19th Century before segregation soiled that sport. Walker, a catcher, made his mark on baseball in May 1884, when he played his first MLB game, over sixty years before the barrier shattering feat of Jackie Robinson. Robinson had to break the barrier a second time, because MLB officially banned black players in 1889.

Walker’s accomplishment of breaking an unwritten barrier the first time is featured in an exhibit inside the new National Museum of African American History and Culture, the Smithsonian facility located not far from the White House.

President Trump did a [photo-op] visit to that facility in February 2017 where he pledged to fight against bigotry, proclaiming his intent to bring a “divided” country together –- another pledge he has failure to keep.

During Trump’s tour of that museum, where he praised the “beautiful” tributes to “so many American heroes,” he apparently did not absorb the import of those tributes. In that museum’s sports section is an exhibit on Walker and other exhibits detailing black athletes who used their sports platforms to protest against race-based injustices in America. One exhibit is the 1968 Olympics protest by American sprinters Tommy Smith and John Carlos who stood on the winner’s podium and raised their fists against institutional racism in the United States.

Smith and Carlos were viciously castigated for this protest – conducted months after the murder of Dr. Martin Luther King Jr. –- with critics calling them unpatriotic, faulting them for inappropriately injecting politics into sports. Yet a dozen years later, the U.S. boycotted an Olympics held in Moscow over a political tiff with the then USSR –- the host country.

In August 2016, when Colin Kaepernick, the now former pro-football quarterback, launched his protest against police brutality by not standing for the national anthem, he told a reporter that there were “bodies in the street and people getting paid leave and getting away with murder.”

Kaepernicks’s observation on failures of authorities to hold police officers accountable for unnecessary fatal shootings and the failures of those shootings to elicit wide public condemnation in many ways mirrors an observation about lynchings that Moses Walker made in his 1908 book Our Home Colony.

Walker, when assailing racist violence against blacks from lynchings to fatal shootings in his book, wrote that those “things have become so common as scarcely to excite more than passing comment.”

Participants in lynch mobs, that often included police and prosecutors, were rarely arrested and less than one percent of those arrested were ever convicted.

When an interracial group of Americans sent a petition to the United Nations in 1951 condemning the racist policies/practices of the U.S. government as genocide against African-Americans, that document linked lynching and police brutality: “Once the classic method of lynching was the rope. Now it is the policeman’s bullet.”

President Trump’s tarring of black pro-football players as unpatriotic for staging anti-injustice protests during the national anthem is a time-worn tactic where practitioners duplicitously extol patriotism while totally disregarding the dynamics of the racism that ravishes non-whites…a process Walker, noted in his book.

“The Negro has often been credited with possessing a strong patriotism; yet the treatment given him at the hands of his fellow citizens is designed ultimately to make him an enemy of government,” Walker wrote.

The “Tackling Paid Patriotism” report issued by Senators John McCain and Jeff Flake criticized the NFL and other pro leagues for accepting millions of dollars from the Department of Defense for staging extravagant \patriotic spectacles tributes that including “performances of the national anthem.” American military services, according to this report, spend $53 million on “marketing and advertising contracts with sports teams between 2012 and 2015.”

Senators McCain and Flake felt “this kind of paid patriotism is wholly unnecessary and a waste and abuse of taxpayer funds.” Actions by those Senators caused the DoD to stop such paid patriotism.

That federal funding paid for game tickets and other perks, expenditures that the McCain and Flake report noted were “questionable and the benefit to taxpayers undefined.”

President Trump ramped up his rhetoric against protesting black NFL players a few weeks after he uttered the statement that “very fine people” were among the Neo-Nazis and white supremacists that staged violent protests in Charlottesville, Virginia this summer.

Neo-Nazis are persons who hold a love for Hitler and the era of Nazi rule in Germany before and during WWII. Hitler’s Nazi Germany institutionalized hatred for Jews, racial minorities, gays, gypsies and religious minorities.

Many feel that an American president praising Neo-Nazis is the antithesis of patriotism, considering such praise an affront to the nearly 200,000 American soldiers and sailors killed during WWII fighting Nazi Germany.

Linn Washington, Jr. is a founder of This Can’t Be Happening and a contributor to Hopeless: Barack Obama and the Politics of Illusion , (AK Press). He lives in Philadelphia.