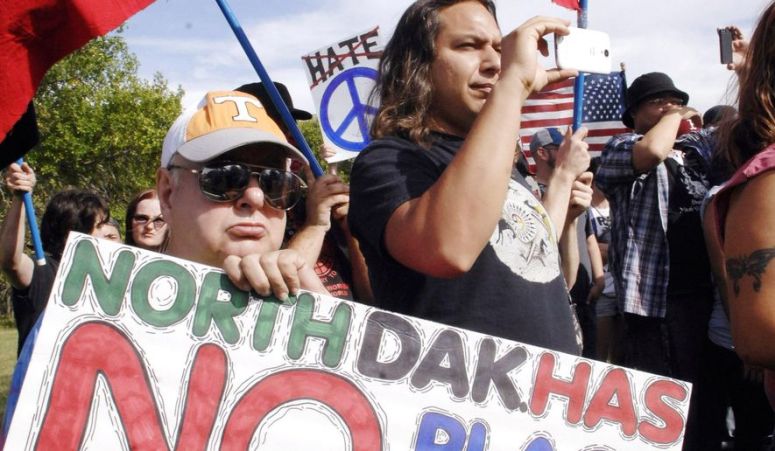 The body of Tamir Rice bears the wounds of U.S. history. Deep wounds. So do the bodies of Central American children like those I visited earlier this year in Karnes County, children whose bodies are scarred and violated because of U.S. history in their homelands, in Mexico, where most of their mother’s bodies are violated, as well as in the Texas immigrant prisons where prison officials hired by the Obama administration accuse mothers staging hunger strikes of “insurrection” while they’re “waiting for helicopters,” according to government documents.

The bodies of black and brown children tell a story of a decadent civilization, a once “lone superpower” now finding itself forced to live in a multi-polar world where it no longer exerts its will as it used to (see rise of China, BRICS, climate change, U.S. debt and the destruction of the welfare state, to name a few) and a body politic in rapid decline. While most of us are all feeling, in unique ways, the effects of declining U.S. power in our bodies, the current increased sickness and mortality of the white working- and middle-class body—a body defined by its unique relationship to power and privilege in the country—is very particular.

All bodies are created equal, but in the United States some bodies, namely white bodies, have historically been more equal than others. But times are changing. The politics of U.S. decline has started making white bodies (statistically) resemble non-white bodies, especially in terms of mortality rates.

The problems facing working- and middle-class whites were clear during several separate but related incidents that took place around the same time last November. Just days after the Paris attacks, a stunning report identified disturbing increases in the mortality rate of middle-aged, mostly poor whites in the United States. Days later, three white supremacists in Virginia sought to increase the mortality rate among local blacks, Jews and other groups by bombing and shooting them in what they hoped would become a race war. Since then, shootings like the one targeting the #BlackLivesMatter movement likely share the logic of escalation in times of decline. You can also see the workings of the politics of decadence in how the bluster and bravado of the Oregon standoff plays to the feelings of decline among whites.

The Oregon standoff and the other terrorist plots in San Bernardino or Virginia or Charleston or Sandy Hook or Minneapolis are clearly symptomatic of a violent culture. Less obvious, is how these actions are rooted in a rapid decline that has shred the middle class and deepened working-class misery while offering the white victims of that decline no explanations or solutions to what they are, literally, feeling in their bones; no explanations, that is, except those more radical solutions offered by Ammon Bundy, Donald Trump and others capitalizing on the decline of the white body.

Insights into physical and psychological effects of this body politic can be found in the conclusions of the report by Nobel Prize-winning economist Angus Deaton and his fellow Princeton economist Anne Case. They point to an unspoken but critically important influence in U.S. and global politics: how the decline in the white body and health mirrors the decline of the U.S. body politic, and why the rest of us should care.

To date, nobody has the final word on what’s behind this major health trend. The search for answers continues. But while existing explanations point to important determinants of increased white mortality—suicide, opiate overdose, etc.—our science should consider another indicator that is no less determinant of white health and mortality. That would be something like a Racial Index of Declining U.S. Exceptionalism, the measure of how much the illness and mortality of a given group rises in proportion to the decline of both the United States and its defining ideal, American exceptionalism.

Were we to consider such an index, our understanding of the specific ways in which whites, the primary benefactors of the postwar rise in U.S. economic and political, military and “soft” cultural power, the primary perpetrators of mass killings—feel the effects of the decline of the middle class, U.S. politics will take a turn for the healthier.

Police reports and greater vigilance and activism offer a glimpse into the workings of policing—and beating and killing—of black, brown and poor bodies in times of decline. At the same time, the Princeton study offers clues to why whites are now the biggest losers in the rapid and irreversible decline of American exceptionalism, the racialized story of a chosen country, a chosen people—white people—designated by God to rule the earth. Put another way, whites and nonwhites are literally dying because of the violent cultural, economic, political and geopolitical shift of the U.S.

Since at least the 1980s, whites, the main heroes in the great stories and grand narratives that defined the United States, have watched the Industrial Age rug that comforted them globalized out from under them. Other, poorer non-white groups are also feeling the generalized decline of the U.S. (and at the same time also expressing more optimism than whites about the direction of the country). But the decline among non-whites has been and continues to be felt by whites in very particular ways, as expressed in the Princeton and other studies.

For example, only 45 percent of whites today say their families will have the opportunity to improve their economic position based on how things fare in the United States, according to the General Social Survey (GSS). This year’s survey has the lowest percentage in the more than four decades the survey has been taken. The rise in death rates among whites parallels the pessimism and economic decline measured in other surveys of unemployment, home ownership, living standards, faith in government and institutions and other measures. Other studies show less pessimism among non-whites, despite the effects of U.S. decline on their bodies.

While Crane and Deaton’s report stresses the importance of the suicide rate, drug overdose and “economic insecurity” in their explanations of their findings on white mortality, their report also hints at what I think are the psychic effects of the decline: no longer believing the the stories of U.S. exceptionalism, the American Dream and other economic and cultural shibboleths that are now fueling the psychology—and politics—of white decline. Middle-aged white Americans “have lost the narrative of their lives—meaning something like a loss of hope, a loss of expectations of progress,” Deaton said in a recent interview.

In addition to the resurgent white supremacist terrorists and other violent groups, those most capitalizing on these physical, material pathologies—and the narratives of psychic and cultural decline that accompany them—are the Tea Party and Donald Trump, Ben Carson, Marco Rubio, Ted Cruz and others like them. Whether it’s Trump’s attacks on blacks, Latinos or Syrians, or Rubio’s decadent talk of a “clash of civilizations,” the Republican Party’s white insurgency lives off the same conditions that, ironically, bring about the accelerated decline and death of the white body and larger body politic.
For their part, Democrats have either coded and softened the right-wing message and politics of decline (i.e. Obama and the Dems standing up for Syrian refugee children while simultaneously jailing and deporting thousands of Central American refugee children) or simply not offered the kind of unifying narrative that appeals to the solidarity between working-class whites and other non-white working-class groups.

This leaves those left of the Democrats with the Dems’ empty appeals (i.e. police or immigration reform) to non-whites and (still) searching for alternatives to the Walking Dead politics that is the far more disciplined (i.e. right-wing churches) and well-resourced (i.e. Koch brothers) among working whites.

In the face of the Walking Dead politics that informs and feeds off of both increased mass shooting and white terrorism and increased attacks on non-whites, the time has come to face the undeniable fact of U.S. decline and its effect on whites, on non-whites and on the larger body politic. Instead of giving into the zombified resignation that the post-American exceptionalist, apocalyptic moment promotes under the guise of the lesser of two evils, some of us must recognize the dead body as real and instead, consider the kind of radical resurrection of the body politic advocated by Martin Luther King Jr., who said, “America, you must be born again!”