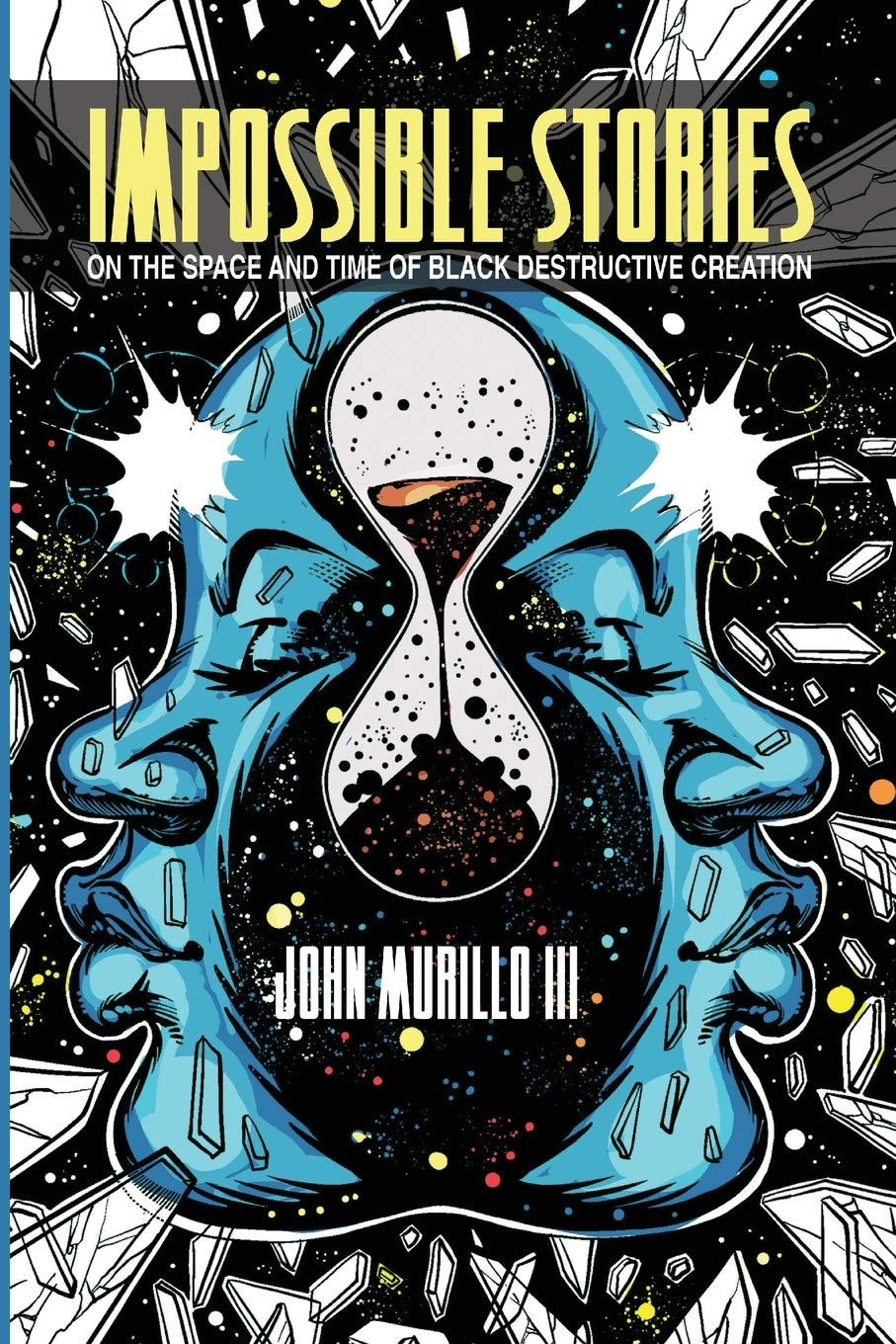 John Murillo’s new book, Impossible stories: On the Space and Time of Black Destructive Creation, dissects Black time and space in order to better understand the nature and mechanics of Black life and death lived in the antiblack world. The following is an interview the author had with with Roberto Sirvent of Black Agenda Report.

Roberto Sirvent: How can your book help BAR readers understand the current political and social climate?

John Murillo III: In Impossible Stories,  I
dissect Black time and space—Black spatiotemporality—in order better
understand the nature and mechanics of Black life and death lived in the
antiblack world. Theoretical questions about the relationship between
Black folk and history, memory, the passage of time, the
problem/question of “progress,” the ability to “belong” somewhere, and
the capacity to move through and occupy a place animate my writing and
thinking throughout, as well as the literary works I curated for the
analysis.

But more importantly, my work depends on a profound concern for the
ways Black folk speak to and experience Black time and inhabit Black
space. Every theoretical claim and manicured line breathes a debt to
narratives of Black life and death that signal the destructive
consequences of Black temporality and Black spatiality as they are in
the antiblack world. I frame all the analysis and theorizing with
all-too familiar narratives of antiblack violence that, once explored
more deeply, reveal how Black time is “untime,” and Black space is
“nowhere”—that the everyday spectacular violence visited upon Black
folks creates a Black existence that is crucially, terribly, and
generatively out of alignment with standard, linear-progressive (read:
Human) experiences of time, and out of step with normative ideas about
the inhabitation and formation of space(s).

I say all this to arrive at the larger question I’m asking before and
after all the timey-wimey, spacey meditations: What have we made, can
we make, and must we make from  our “untimeliness” in the middle of “nowhere?” And also, how  do we undertake this kind of creation, the kind that uses  our destruction as originary material, as prima materia, whether that creation takes place in streets, on screens, on pages, or elsewhere, now or whenever?

Impossible Stories  analyzes literature, narrates Black
experiences, and draws from physics in order to speak to this essential
part of Black work: this ceaseless taking-up of destruction in order to
make time when there isn’t any for Black folk, and make a way when there
is no way. What we’re seeing out in the streets now, the ongoing
protracted struggle on behalf of George Floyd, Breonna Taylor, Toni
McDade, and all the named and unnamed and unrecorded folk who have died
and will die in the name of the antiblack world, is, at its fundament, a
transmutation of our own destruction into creative political action
(that itself is generatively destructive, in the name of the unnamable
political project of building another world). I think my work sheds
light on that destructively creative, creatively destructive practice.

What do you hope activists and community organizers will take away from reading your book?

I hope that both find something complementary to the ongoing, active
refusal to accept the world as is. The work is an assessment of the
influence of Black spatiotemporality on Black work:  on what we
do, how we do it, and what’s at stake in doing it. It is not meant to
“lead” anything or anyone, but to parse out the mechanics, stakes, and
possibilities of doing our various forms of Black work when we more
precisely understand and actively embrace the spatial and temporal
characteristics of Black life and death in the antiblack world. I think
there is utility in that, but I don’t want to misrepresent this as some
kind of guidebook. I just think that in analyzing what I believe are
essential elements of Black life, work, and death in the antiblack world
can be useful in shaping all  of the work we do, possibly sharpening it, or maybe just honing it.

We know readers will learn a lot from your book, but what do you hope readers will un-learn? In other words, is there a particular ideology you’re hoping to dismantle?

I very seriously hope readers un-learn something we all uncritically hold to be true, or universal: the experiences of time  and space.  There
are many more analyses of the problem of Black space, and many of the
forms those problems take in the real world—e.g. gentrification—are more
widely accepted as issues that represent that larger problem of Black
spatiality. I have “new” things to say about that, but this problem
isn’t as pressing as the other.

As Michelle Wright notes in her own Physics of Blackness,  there
are consequences to the uncritically accepted notion that the word
“time” names some universal experience of linear progress that all
humans share. Perhaps that is true if we recognize that Black folk, in
the antiblack world, don’t get to be  human, except perhaps
biologically: as far as humanity in the sociopolitical world is
concerned, we do not bear the accoutrements of human life; this is a
consequence of living in what Saidiya Hartman calls “the afterlife of
slavery” and what Christina Sharpe dubs “the wake.” The distended
temporality of slavery, the way the “time” of enslavement reaches into,
shapes, interrupts, twists, and disappears all time after it via the
antiblack world’s political systems and structures, its ideologies and
values, and the minds, hearts, and behaviors of every single individual,
warps Black folks’ experience of time in ways that affirm our sense of
the world, of “progress,” and of the possibilities of the future.

So mainly, I would hope we could un-learn an acceptance of time as linear or coherent for Black people.

Who are the intellectual heroes that inspire your work?

The list is insanely long, here, and some folk are on it for many
more reasons than one. Reducing this list to a few people is like naming
the top 5 in my NBA pantheon.

In what way does your book help us imagine new worlds?

Impossible Stories  asks us to reimagine Black work, all of
which is inherently creative, be it activist work and political
organizing, novel- and poetry- and song- and story-writing, as destructive  work.
This is not some new discovery, but it is naming an important tendency
or undercurrent of Black work that I don’t think is often framed this
way.

My perspective is a predominantly afropessimist one, and one of the
most frustrating questions lobbed at afropessimism is: “Well, what are
we supposed to do with that, then (if everything is as bad or as deeply
‘impossible’ as you say it is)?” Usually, the question aims to take what
I interpret as a very understandable frustration with the truth or
resonance or applicability of this theoretical framework to what Black
folk are actually seeing in the world and, rather than aim it out at the
world creating the problems afropessimism names, aiming it at the one
doing the theorizing that names the problems—basically, the question is
asked as a way of trying to kill the messenger because of the message,
and not the system of domination we name and its agents around and
within us. But with the advent of more and more writing that avows
afropessimism and wields it as guide toward new questions, new claims,
new terms, and new possibilities, responses to “what are we supposed to
with that?” are becoming clearer.

This is my entry into the growing collection of voices and works that
uses afropessimism in this generative manner. In my own way, I am
saying that this world has no time and no space for Black life; that
Black time and Black space are violently incongruous with the time and
space of the antiblack human world; and that our task is to take those
facts that unmake, or destroy us, as the stuff with which we might
create a radically different world.

To answer the question, “What are we supposed to do?”, differently,
we must take the constitutive, destructive features of being Black, with
no place to be and no time to spare, and wield,  rather than
ignore or misrepresent, these things that (un)make us to do the
impossible work we all are trying to do, whatever the tagline or slogan
or school of thought we bear.