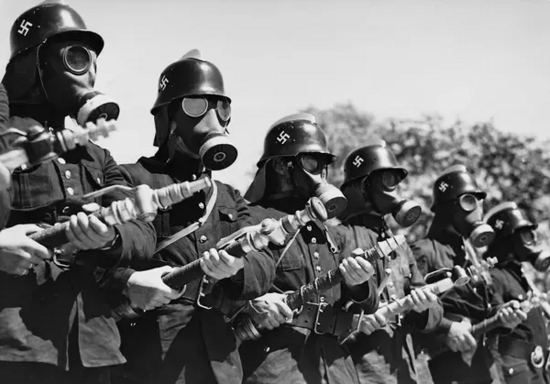 Donald Trump and his cohort of propagandists at Fox News would have us believe the major cities of the United States have been turned to ashes and rubble by mobs of racial justice and antifa activists. But after weeks of sustained protests in the aftermath of the police murder of George Floyd, the only thing actually in ashes is Trump’s credibility.

The image of rampaging activist hordes, however, is key to the all-encompassing fiction the right has been spoon-feeding to itself for decades. Believing in that fiction translates into the belief that anything done to stop it is positive on its face.

Enter the faceless, anonymous, heavily armed federal officers snatching protesters off the streets of Portland, Oregon. One would think that people on the right, who have spent years warning of “jack-booted government thugs” coming to take our rights by force, would be horrified by what we are seeing in Portland. It is their grim prophecy made flesh, and yet they are responding either with silence or active support, apparently because they saw it on Fox.

“I’m going to do something, that I can tell you,” Trump said of the uprising during his erratic Fox News interview last Sunday. “Because we’re not going to let New York and Chicago and Philadelphia and Detroit and Baltimore and all of these — Oakland is a mess.”

And then, the penny dropped.

Deploying federal forces to Portland — and to Chicago, Detroit, Philadelphia and other cities, according to reports — is the unmistakable shriek of authoritarianism. Governors of the potentially affected states are gearing up to fight the administration. Their mood was best captured by, of all people, Tom Ridge. Ridge, the former Republican governor of Pennsylvania who served as George W. Bush’s director of Homeland Security, minced no words regarding Trump’s flagrant abuse of power.

Trump’s actions in Portland are terrifying by any standard.

“Had I been governor, even now, I would welcome the opportunity to work with any federal agency to reduce crime or lawlessness in the cities,” Ridge told the Pennsylvania Capital-Star. “But I would tell you, it would be a cold day in hell before I would consent to an uninvited, unilateral intervention into one of my cities.”

Trump’s actions in Portland are terrifying by any standard, but are also as crass and grasping as everything else he has done since he first polluted the White House. By openly stapling these actions to “Biden” and “very liberal Democrats,” Trump made it clear that as far as he is concerned, this is all about politics and the upcoming election. In poker, this is what they call a “tell.”

According to every reputable poll taken over the last several months, Donald Trump is trailing presumptive Democratic nominee Joe Biden by wide margins. Trump himself appears to have finally accepted this, which may explain the absence of bombastic nonsense at his newly reborn COVID-19 briefings. Of course, as far as those briefings go, we’ve all heard “responsible-sounding Trump” before.

Trump cannot campaign on his successful fight against COVID, because he has failed that challenge with spectacular vigor. He cannot campaign on the economy, because it has been all but obliterated by his COVID failures. He has tried to campaign on brazen racism, but it has not turned the polls in his favor.

What, then, is left to campaign on?

Specifically, the vile, truthless caricature of the left Trump and his people have been conjuring for his base in an effort to justify the use of anonymous federal gendarmes against us.

More to the point, one gets the definite sense that Trump desperately wants an on-camera street fight with these protesters. Deploying those federal officers is a massively antagonizing move, and Trump would love nothing more than to have some protesters take the bait.

There would be more blood in the streets, Trump would have his fight, and he could point and say, “Look! This is the America Biden and the liberals want! Only I can save us!” Indeed, new Trump campaign commercials are making that specific argument. Ads are one thing; live footage of street violence is something else altogether.

If Trump really doesn’t want this, he’s damn close to getting it by accident. In the meantime, the protests will continue as citizens demand a long-sought redress of glaring racial and social injustices.

In Portland, the protests have produced surreal and beautiful displays of strength from vulnerable protesters in the face of federal violence. Some days ago, at the intersection of Third Avenue and Taylor Street, a group of protesters were being corralled by law enforcement officials, including some of these anonymous protest-snatchers.

Out of the crowd emerged a naked woman wearing only a mask and a cloth hat. She performed some ballet moves in front of the police before sitting down and exposing herself to their potential violence.

The police fired pepper balls at her feet, but she did not budge. A protester ran to her with a shield to protect her, but she waved him off. She sat, as bereft of protection as the police were armored, until the police — seemingly demoralized and confused — backed off. The woman disappeared back into the crowd, and no one knows her name, but some have come to call her “Naked Athena.”

The secret, rights-crushing cops in the streets of our cities are a manifest campaign move by Donald Trump. They also represent a deeply dangerous power grab that seemed inconceivable before Trump. He has successfully normalized the unthinkable, and in places like Portland, he clearly appears to be doing so to get votes.