Conventional wisdom says that place matters more for people who live in distressed neighborhoods—places with low median incomes and not a lot of opportunity. That’s why policymakers have traditionally focused on one of two place-based solutions. Community development grants and tax breaks, for example, are aimed at improving conditions by luring investment into disadvantaged areas. Housing voucher programs, meanwhile, are supposed to help low-income families escape distressed neighborhoods and move to ones with higher median incomes and better educational outcomes.

But what if our approach to geographical inequality is lopsided? What if we’re overlooking the contribution of so-called advantaged neighborhoods in maintaining status quo?

In a 2019 paper published in Sociological Quarterly, Junia Howell, a sociologist at the University of Pittsburgh, argues just that. “As important as investigations into disadvantaged neighborhoods are,” she writes, “the nearly exclusive analytical focus on them has the unintentional consequence of downplaying the role that advantaged neighborhoods play in stratifying educational outcomes.”

In this paper, Howell tested what types of neighborhoods had the most influence on their residents by analyzing a trove of data going back a half-century from the Panel Study of Income Dynamics (PSID). Administered since 1968 to a representative sample of 5,000 households across the U.S., this is the world’s longest-running longitudinal household survey, and it allowed her to track children in the survey throughout their childhood and into adulthood. She had information on what they did for a living, how much they made, and what block they lived on for each year of the survey. Connecting that with census data allowed her to paint a picture of the neighborhoods they lived in.

That definition is “in itself problematic,” Howell said, because the lack of opportunity in these places is a symptom of historical treatment and structural problems. But she wanted to use it to be consistent with previous research. (She also looked at other measures of neighborhood disadvantage, like median income and educational attainment, and found similar results.)

Put another way, living in an advantaged neighborhood would make a substantial difference to educational attainment of a person, compared to another with comparable family and individual profile. But for people living in moderate or very disadvantaged neighborhoods, educational outcome is similar if everything else is similar. So parental education level and income may matter more.

Howell concludes in the paper:

Findings suggest neighborhood structural effects are asymmetrical. These results suggest that educational inequality is driven by the compounding privileges of the most advantaged residents. 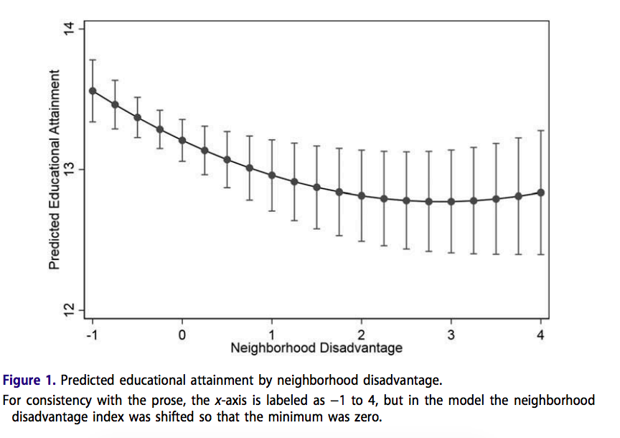 Another striking finding of the study is how these results differ by race: She finds that whites are concentrated in the most advantaged areas, and experience a strong positive effect of living in these areas that drives the overall strong influence of these neighborhoods.

Black residents are more widely distributed across wider variety of neighborhoods, although still overrepresented in disadvantaged ones. But educational attainment is not as affected by this geography. That means, even if African Americans live in advantaged neighborhoods, they may not experience benefits compared to what their white counterparts experience.

Here’s what that looks like on a graph. Again, the predicted educational attainment line for whites is way steeper, whereas for blacks, it’s much more level.

The study doesn’t say anything about how exactly privilege compounds in advantaged areas, or why it manifests more for white residents than their black neighbors. But Howell has some theories: Generational advantages (legacy admissions, family wealth), social networks that give white kids preference in private school and college admissions, and institutional practices (like inequality in high school “tracking”) may all play a role.

Research has shown that where children grow up affects how they fare academically, economically, and physically; it also predicts how they interact with the criminal justice system. This study confirms that neighborhoods do matter, but gives a new, surprising answer to questions like “for whom?” and “how much?”

That has implications not just for the way policy interventions tackling inequality are designed, but how cities themselves are planned, Howell said; it challenges a central assumption that poor areas, and the people who live in them, are the problems. To solve disparities, therefore, a single-minded focus on pouring resources into disadvantaged neighborhood may not just be ineffective, but also counterproductive. The core problems lie in places and in institutions outside those communities.

“We need to start by reframing, both on the public side and the policy side, how we think about and talk about these spaces,” Howell said.

Tanvi Misra is a staff writer for CityLab covering immigrant communities, housing, economic inequality, and culture. She also authors Navigator, a weekly newsletter for urban explorers. Her work also appears in The Atlantic, NPR, and BBC.