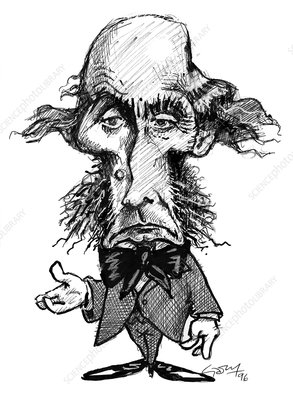 Wildly inaccurate facts and spurious arguments are
unavoidable features of social media. Yet no matter how infuriatingly
wrong someone is, or just how much counter-evidence you have at your
disposal, starting arguments on the internet rarely gets anyone to
change their mind. Nearly a century-and-a-half ago, British philosopher
John Stuart Mill explained, in a few clear sentences, why certain
arguments simply won’t go anywhere. As historian Robert Saunders notes, Mill’s analysis neatly applies to heated and futile internet debates. 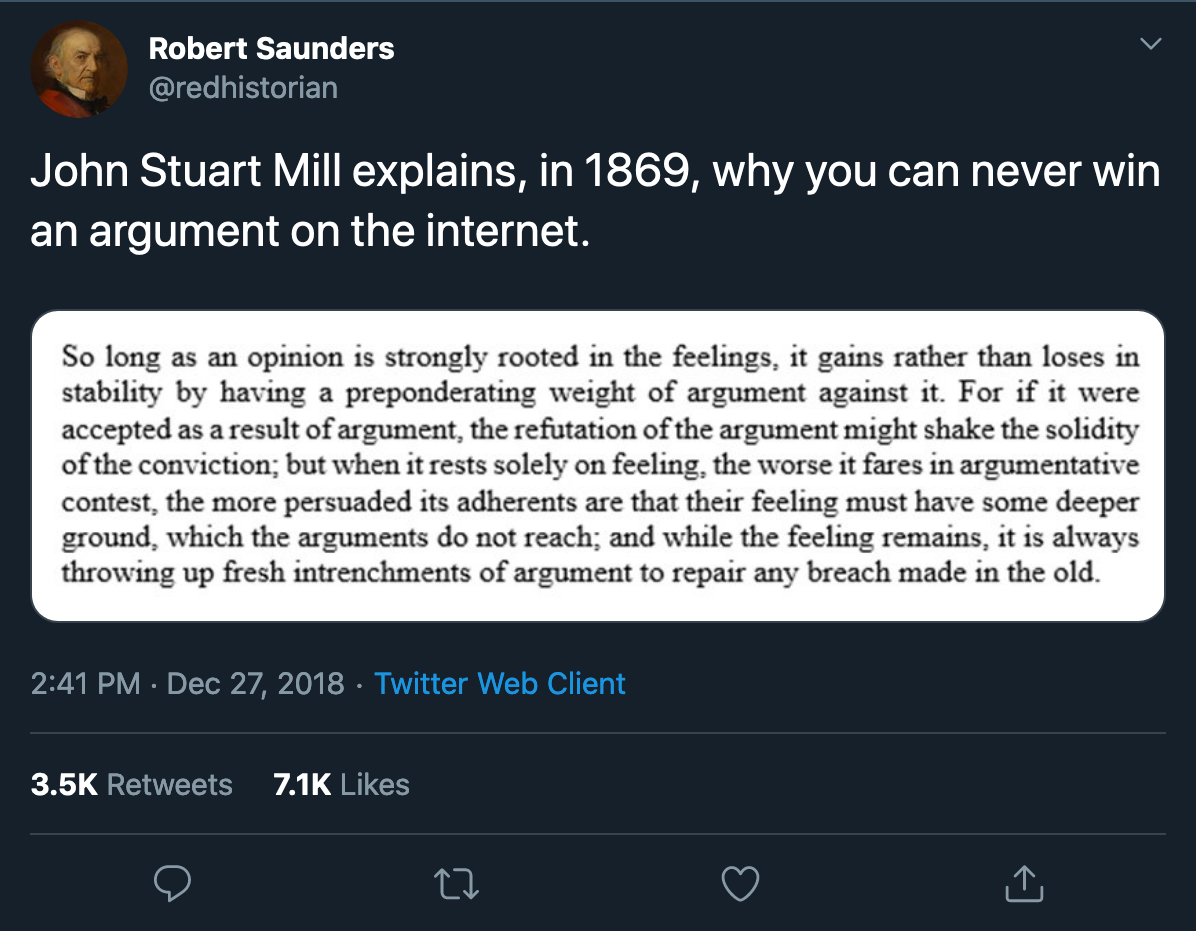 Mill highlights the often overlooked reality that
many opinions aren’t based on facts at all, but feelings. And so,
contradictory points of information don’t shift emotionally rooted
arguments, but only cause people to dig deeper into their emotions to
hold onto those views.

Intuitively, most people recognize that emotions
motivate opinions, and behave accordingly. We use rhetorical techniques,
such as verbal flourishes and confident mannerisms, to help convince
others of our views. And we know that angry reactions to, for example, evidence showing
that children of same-sex parents fare just as well as those raised by
heterosexual parents, are grounded in emotional prejudice rather than a
deep-seated desire for the facts.

Studies reinforce these instincts about the
importance of emotions. For example, patients who have brain damage in
areas responsible for processing emotions also struggle to make decisions (pdf),
pointing to the importance of emotions in deciding between two options.
And chartered psychologist Rob Yeung, whose book How to Stand Out emphasizes the effectiveness of emotions, rather than logic, in convincing others to agree with you, points to research showing that use of metaphors motivate people to make decisions.

Online, when we can’t see others’ faces or their
moods, it’s easy to lose sight of these emotional instincts. Instead of
engaging with and respecting others’ feelings, there can be a tendency
to bombard those with opposing views with “facts.” But even seemingly
solid points of information, such as the periodic table, are often grounded in subjective perspectives;
a broad philosophical theory called “social constructivism” argues that
facts are always a reflection of socially constructed values. There are
often multiple ways of interpreting a single point of information and
so, much though some people might like to think they’re right about
everything, there are surprisingly few issues to which there’s an
unequivocally correct opinion.

Perhaps there’s little hope of convincing others on
the internet to change their minds. But, as Saunders notes, Mill does
point to another approach. 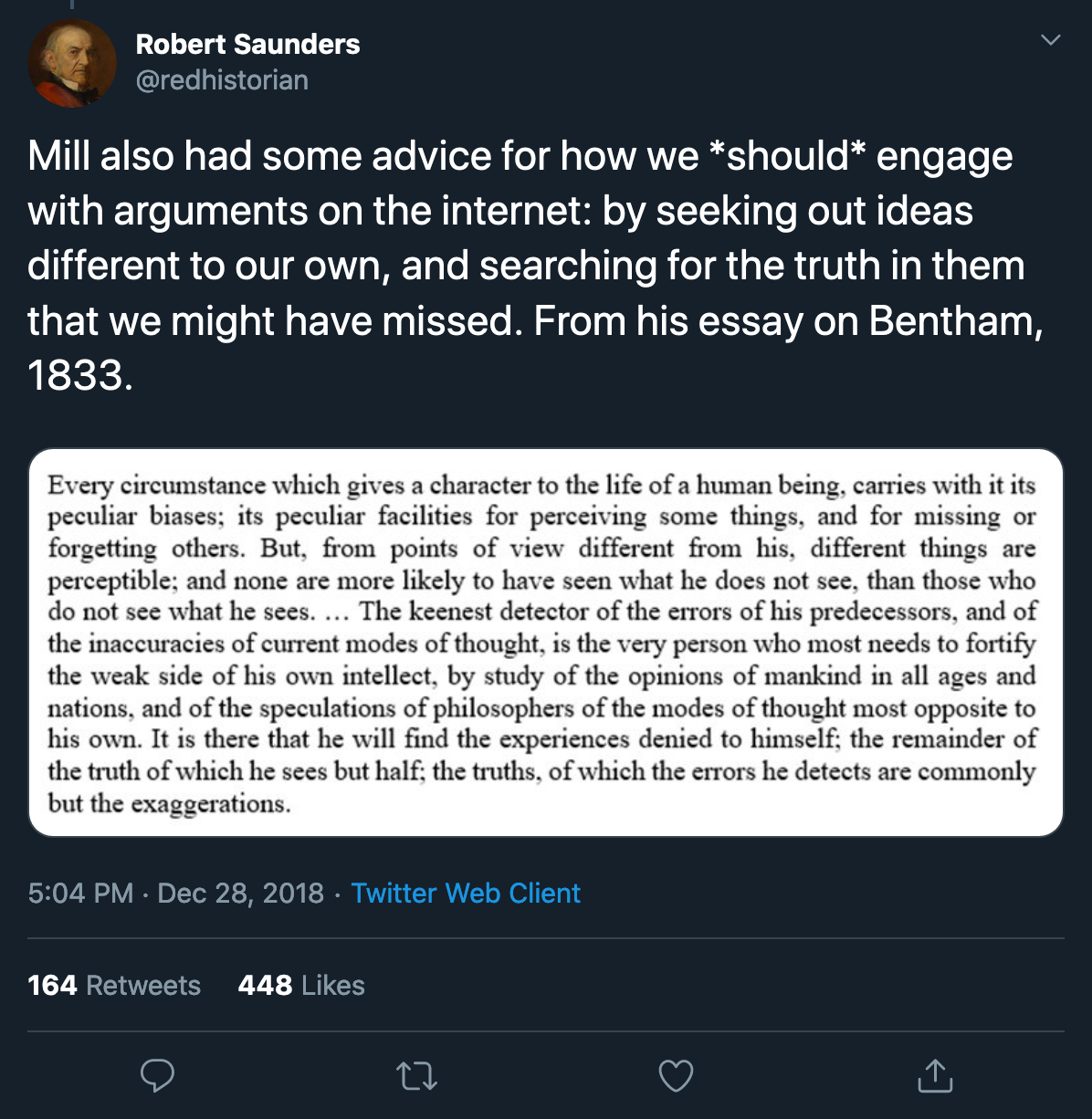 Instead of seeking to convince others, we can be
open to changing our own minds, and seek out information that
contradicts our own steadfast point of view. Maybe it’ll turn out that
those who disagree with you actually have a solid grasp of the facts.
There’s a slight possibility that, after all, you’re the one who’s
wrong.