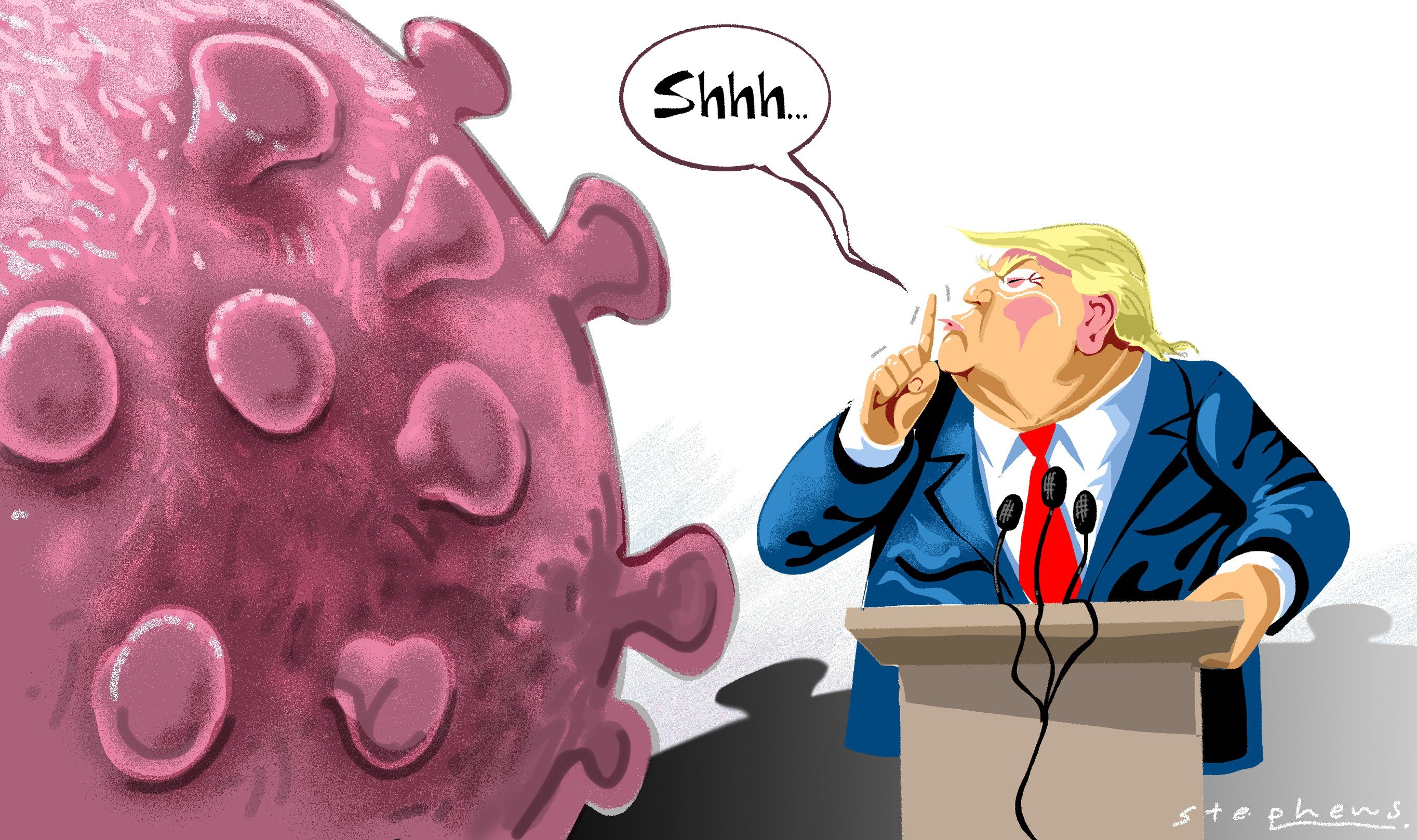 We have a bad national habit of allowing a low bar to be set for our leaders, especially when we already know their flaws. A bad politician in a debate, for example, can be said to have done well if they didn’t accidentally light their podium on fire; by thwarting their own dim-bulb arsonist tendencies, they “outperformed expectations.”

The nation needed a president last night, if only for about 10 minutes. Instead, we got Donald J. Trump, who went on prime-time network television from the Oval Office and set the Resolute desk — once the work station of John F. Kennedy, Jimmy Carter and Barack Obama — fully on fire with a Molotov cocktail of lies, nonsense and rank xenophobia that plunged the nation deeper into turmoil and distress.

Like many millions of Americans along with billions around the world, the novel coronavirus (COVID-19) is of immediate and pressing concern for me. I do not believe this thing is going to turn into the lost chapter from Stephen King’s The Stand — though the burial pits in Iran that are visible from space do fit the profile — but I am charged to guard the health and welfare of an elderly mother with lung issues and a daughter who attends public school.

For reasons virologists are striving to understand, the virus seems to be going out of its way to spare children, thank Dog, but my mother sits directly in the pandemic’s crosshairs. COVID-19 surrounds our corner of New Hampshire on five sides according to the Johns Hopkins outbreak map, and if the pattern from China to Italy to Seattle to Boston holds true, one or all of those five outbreak locations will soon bloom. We have been lucky here, but that luck will not hold forever.

Like those millions and billions, this thing is knocking on my door. I needed a president to tell me about the availability of testing for the virus, about deliberate actions taken to contain the spread, about social distancing and other preventative measures, about preparedness for a disruption that may last weeks. I needed to know there was a steady hand on the wheel, if only for a few minutes. I needed to know the facts if I am to properly protect my people, and by proxy my community.

Of course, this president let me down. Donald Trump’s barefaced unreliability is the single most reliable aspect of his existence, and last night, it was a cold and bracing wind upon a vexed and troubled land.

The gross xenophobia of Trump’s prime-time address, like virtually every other aspect of his “leadership,” was both astonishing and thoroughly unsurprising in equal measure. His invocation of a war against a “foreign virus” was a perfect echo of his racist attacks upon immigrants and refugees. Linking diseases to outsiders is an old canard peddled by dubious leaders down through history. Last night, it was precisely the wrong medicine, a hot dose of hate intended only for his base.

And then there were the lies, and the other lies, and more lies to boot.

Trump told the country that major U.S. insurance companies “have agreed to waive all copayments for coronavirus treatments.” Before the echo from the speech faded, a spokesperson for America’s Health Insurance Plans (AHIP), a muscular insurance industry lobbying group, jumped up to say no, nope, no coverage for treatment. Only “for testing,” they said.

Translation: Here’s a free test. Oh, looks like you have the virus. Good luck affording the treatment, which could become financially debilitating in a day. Help yourself to some hand sanitizer before you leave, but please make sure to sanitize your hands before touching the hand sanitizer. How? Not my problem.

“We need data, meaning the ability to test more people to understand where community transmission might be occurring,” counsels Aaron E. Carroll in The New York Times. “We need to protect those who are most vulnerable, supporting their ability to self-quarantine. We need to convince people who might be sick, even mildly so, to stay home. And we need to make it economically possible for them to do so. Without quick action, what we’re seeing in other countries may happen here, with terrible consequences.”
Donald Trump’s barefaced unreliability is the single most reliable aspect of his existence.

Even the tests are hard to come by. On Thursday morning, Congress was informed that only 11,000 COVID-19 tests have been conducted to date nationwide. That translates to about five tests for every million citizens. South Korea, by comparison, is currently conducting 10,000 tests per day. Great Britain, with its national health care system, has had accurate drive-through COVID-19 testing available for a week. You don’t even have to get out of your car. Beep twice for the obvious lesson here.

I am not going to bother trying to parse President Fuckwit’s galactic “European travel ban” garble-warble from last night. As with his claims regarding insurance coverage, his foray into internationalism once again devolved into a festival of market-bending nonsense that sent stocks into yet another tailspin on Thursday.

“Although he read from a prepared script as he delivered a rare prime-time televised address to the nation from the Oval Office,” reports an intensely polite Washington Post, “Trump incorrectly described his own policy.” This is a kind way of saying the president of the United States exploded an already-fragile set of international relationships by getting even the simplest, broadest details of his own policy wrong on live television before a global audience.

In the face of a pandemic, this president has counseled tax cuts as a cure, a gambit George W. Bush perfected after September 11. Meanwhile, the NBA has suspended its season until further notice, the NCAA basketball tournaments will be played in empty stadiums if they are played at all, Tom Hanks and his wife have the virus and found out because they are in Australia where testing is also readily available, a Senate staffer has tested positive as well, but never fear, because Jared Kushner is “in total control” of the crisis for the White House.

In the absence of presidential leadership, never mind minimal presidential competence, we must be our own leaders and take care of our families and communities as best we can. We play with a stacked deck — the potential collapse of an overwhelmed for-profit health system, tens of millions uninsured, half a million homeless, millions more who are elderly, infirm or immunocompromised — as we watch what Italy and other nations are enduring.

This is coming, in one form or another, and as Donald Trump has made clear, all we have is each other, because we don’t have much else.