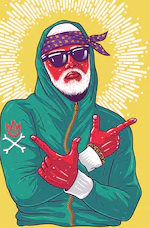 “You are now witnessing the devolution of rap music. The death of poetry and smoothness, they use this. The absence of a message. This inability to create meaningful change through words and verses, but the worse is, they don’t even know they hurt this artful purpose, it’s tragic.”– Rakim

I remember listening to my first rap song, “Rapper’s Delight” by The Sugarhill Gang back in ’79. It was fun, bouncy & lightly humorous with a Nile Rogers-inspired bass-line that will stand the test of time. Aint no shame rapping along to this classic in front of kids, parents, grandparents, whomever!

“Now, what you hear is not a test I’m rappin’ to the beat
And me, the groove, and my friends are gonna try to move your feet..”

Most of the rap songs that came out around that time were in fact quite infectious & universal like Funky 4+1’s “That’s The Joint”, Kurtis Blow’s “The Breaks” & The Treacherous Three’s “The Body Rock”. If music reflects the times, one can argue that the music emerging from that time period was somewhat hopeful, comparatively speaking, given that the occupational status had improved for blacks and their educational attainment was getting close to that of whites. Soul music also reflected this hopeful feel like Kool & The Gang’s “Celebration” , The Brothers Johnson’s “Stomp” & Michael Jackson’s “Off The Wall”.

Then the lights went out….

I’ve read various accounts from a number of sharp minds of how Rap music veered off into the dark shadows of nihilism & pop-sugar irrelevance. Most of these well-researched accounts give plenty of insights on Rap’s evolution & transformation over the years . Some notable highlights I found quite persuasive include –

This evolution became baked into the ugly narrative of the Other in America. Many rappers in essence became accomplices to their own persecution & took the art form  to unbelievable heights of repugnance – a  full frontal attack on our sensibilities & moral universe. At the risk of sounding like a moral zealot — do we really need to hear the devaluing of our sisters in such crude ways on a daily basis? Would any of them call their sisters and mothers bitches & hoes? It has been argued that the commercialization of Hip Hop for largely white audiences became linked to the overwhelming objectification of women of color in rap lyrics and videos. This shouldn’t be surprising given the reach & influence of America’s racist/sexist/classist-bound history/value system & how patriarchal gender roles are assigned in Western culture –the extreme being of course, the vile & pornographic depictions of women (& sometimes girls) in subservient, denigrating & powerless  positions. So Lil Wayne rapping ” Suck this dick and swallow that nut & call it Penis colada” comes from the same cloth of President Trump’s “Moved on her like a bitch…grabbed ’em by the pussy…you can do anything“. This influence on Rap/HipHop culture (and all other musical genres for that matter), is without question. As journalist/Hip Hop historian Davey D once observed, “Keep in mind when brothas start flexing the verbal skillz, it always reflects what’s going on politically, socially, and economically” As we all know,  art & life oftentimes imitate each other quite graphically & soullessly (look at any “reality” TV show for clear examples of this or go to any rap concert & witness young women thottin’& boppin’  like in the videos ) .

What disappoints me  the most is how normalized this has all become. Lil Wayne, Eminem & Snoop Dogg are all celebrated worldwide in spite of the lyrical content of most of their hit songs. I remember one young man telling me “it’s the beat I care about, not the lyrics“. I responded, “So calling women bitches & hoes doesn’t offend you?” His response, “Nah…they say that stuff all the time..I don’t think anyone cares. They’re making money!! That’s what matters!”. This brings me to a very disturbing observation: the unbridled glorification of wealth, celebrity & narcissism in American culture & the slow draining off of moral witness/agency, self-respect & respect towards others, especially among our youth. If you examine it closely, this sub-genre of Hip Hop music mimics a backwards-looking, Westernized worldview which has ensnared so much of the world. Don’t misunderstand: I am not totally blaming Rap music as Rock, Techno, Country & reggae are also carriers of society’s ills &  contradictions. However, I purposefully single out the current state of commercial, market-driven Hip Hop because of its reach & influence on impressionable minds. Indeed, there are many progressive artists with powerful messages — Dead Prez, Talib Kweli, Big K.R.I.T, Murs, Lupe Fiasco & Vic Mensa– but, with the exception of Kendrick Lamar, J. Cole, Common, The Roots, Q-Tip , NAS & a few others, progressive artists are mostly overshadowed by the Cardi B’s, Futures, Gunnas & Drakes of the world. This is by design. Nothing wrong with the Gunnas & Futures, but I can’t connect with what they’re saying. Older Hip Hop heads know what I’m talkin’ ’bout!

Gone are the days when young people would look up to powerful figures like Malcolm X, Angela Davis, Martin Luther King & Stokely Carmichael. They’ve been replaced by celebrities in the entertainment, sports & business worlds. This grotesque celebrity culture is the underside of illiteracy in America –historical illiteracy, civic illiteracy & ethical illiteracy — and it is this celebrity culture, with its greed, vanity, vacuity & sycophantic media cheerleading, that reproduces these paralyzing images, grammars & lifestyles which render our young vulnerable & ultimately, disposable, undesirable, unthinkable, dangerous, pathological…dehumanized.

There is hope though. One thing about African-American culture is its eternal springs of innovative reformulation. This is truly a testament of the genius of African-American art & culture in spite of a capitalist ethos bent on appropriating & disassembling this amazing creativity into profit-oriented, commercially viable product. I think Michael Eric Dyson said it best on the Robert Glasper Jr song, “I Stand Alone”: –

Now it is true that the genius of African culture is surely its repetition, but the key to such repetition was that new elements were added each go-round. Every round goes higher and higher. Something fresh popped off the page or jumped from a rhythm that had been recycled through the imagination of a writer or a musician. Each new installation bore the imprint of our unquenchable thirst to say something of our own, in our own way, in our own voice as best we could. The trends of the times be damned

Thank God we’ve still got musicians and thinkers whose obsession with excellence and whose hunger for greatness remind us that we should all be unsatisfied with mimicking the popular, rather than mining the fertile veins of creativity that God placed deep inside each of us

Kanye West, as much as I dislike his impulsive, historically-challenged politics, is nonetheless a creative genius & one of the most influential Hip Hop producers/artists of our time. His recent departure from secular rap to gospel rap will more than likely help create a better atmosphere for more progressive & illuminating rap to bubble up to the surface again & be more widely heard & appreciated especially for this current generation of young folk.  I see this as one step in the right direction, but more critically, a bigger step must take place in the wider society & how it treats people of color & communities in need of social & economic opportunities & resources– it’s all interconnected.

So yeah, maybe my ass is getting old! I sometimes remind myself of one of those chatty old cats on park benches pointificating about the madness of music & the ills of modern life while feeding bread crumbs to the pigeons. It’s all good. Sometimes the young will smirk, deride, challenge &/or dismiss what I have to say, but that doesn’t stop my stubborn ass from rappin’! At some point, I always hope, something might click & stick like it did for me back in the day. The point is, as we get older we must embrace the wisdom that comes with it, try to pass it on but accept the fact that Hip Hop generation today is different with a lot of stuff on their plate to deal with. Older Hip Hop heads like myself find wisdom and fulfillment in things that today’s young won’t understand until they become us and that’s all good.