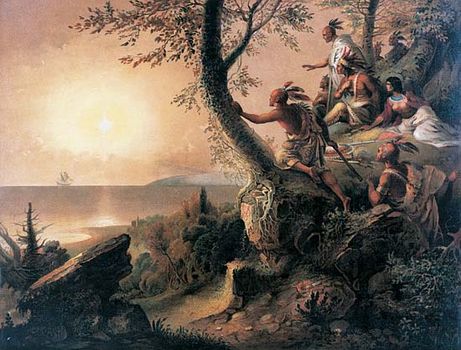 At least since historian Oswald Spengler published his prophetic The Decline of the West(1918), Western “civilization” has been portrayed as in a severe state of crisis and decline. For more than two centuries, the imperial enterprise of the United States has colonized the territories and resources of the original nations of this continent while pretending to have a “providentially assigned” or “God-given” destiny. This is the evidence of white Christian nationalism in U.S. law, based on the Bible and Christianity. Christendom was supposedly mandated to consume and eliminate heathendom.

As a Shawnee-Lenape writer, I prefer to think about such matters from an Original Nations’ perspective. Our Native ancestors were standing at the ocean shoreline, centuries ago, looking out at the first invading ships from Christendom coming toward them. Now imagine us as present-day Native people standing next to them with 500 years of hindsight.

This is a technique to begin decolonizing our minds. One step of that process involves taking a closer look at the way the English language colonizes our thinking. What is colonization? What is civilization?

In his book Civilization: The West and the Rest (2011), Naill Ferguson referred to that context as the West’s “ascendancy,” a term Webster’s defines as domination. Samuel Morison, in his Oxford History of the American People (1962), defined colonization as “a form of conquest in which a nation takes over a distant territory, thrusts in its own people, and controls or eliminates the native inhabitants.” Morison said that “modern colonization” has resulted in “world dominion.” Again, the theme of domination. The massive wealth accumulated by Western civilization is the result of patterns of genocide, expropriation of resources, and colonization, all maintained under the rubric of “globalization” and the “global economy.”

These days it is common to find discussions of decolonization. Cambridge University, for example, recently announced that it will work to decolonize its English literature curriculum. The theme of decolonization gained global attention during the activism against the Dakota Access pipeline in the Great Sioux Nation treaty lands and the Tar Sands in the far northern region of Great Turtle Island, to name just two examples.

It makes sense, in principle, that decolonization can be achieved by reversing patterns of domination. Yet where is the clear image of a decolonized society we are to emulate? There isn’t one. Yet if we are to free ourselves, we need practical steps.

When we talk about decolonization we are making an effort to think and articulate the results of colonization we want to dismantle without saying what should replace a colonized existence. Liberation is a word that appears to speak about something positive yet provides no clear image of the kind of society that will replace institutionalized oppression.

The Western mindset continues to be a primary source of domination.

Here’s one possibility: providing a territorial sanctuary for Original Nations to enable them to build models of ecological, cultural, and spiritual sustainability free from the imposition of U.S. domination.

The Western mindset continues to be a primary source of domination, and a little-noticed paradox makes replacing a colonized mentality easier said than done: The English language I am using to write this article has been designed to reinforce and maintain the domination I want to end. We cannot end colonizing patterns by continuing to think and act in ways that maintain those patterns.

The languages of Original Indigenous Nations are repositories of vitally important cultural and spiritual models based on an attitude of deep reverence and respect for Mother Earth—for water, and for the ecosystems of the planet. Yet we all live under the “plenary power” of the United States. The verb “civilization” is defined by Webster’s as “the forcing of a cultural pattern on a population to which it is foreign.”

We ought to translate traditional cultural and spiritual concepts from our Original Nation languages into English. Those meanings and teachings contain thousands of years of ancestral, cultural, and spiritual imagery that the Western mindset does not naturally contain. My Oglala friend and mentor Birgil Kills once told me, for example, that an Oglala Lakota metaphor for marriage is the two wings of a bird. When they move together in unison the bird is able to fly beautifully. Other examples include “Mother Earth,” “the love of the land,” “All Our Relations,” “the land takes care of us when we take care of the land.” Some of the Seven Laws of the Oceti Sakowin as, Wacante Oganake, “to help, to share, to give, to be generous,” Wowaunsila, “pity, compassion,” and Wowauonihan, “to respect, to honor.”

Admittedly, such simple ideas can’t amount to much when the traditional territory of every Original Nation and the land of every Indian reservation on Great Turtle Island is legally and politically defined as “U.S. soil” and controlled by the United States based on the Doctrine of Christian Discovery and Domination.

All this civilization and dominion have brought Mother Earth to a period that scientists are calling the Sixth Extinction, the brink of ecological collapse. What kinds of negative impacts are going to result from radiation being released daily from the devastated nuclear reactors in Fukushima, Japan? The acidification of the oceans continues unabated. The massive decline of the global insect population is a powerful indicator that the planet is not right. Western systems make it fairly impossible for us to build economic models premised on reverence and an abiding respect for all life.

Clearly, we must not stay within the mental and behavioral limits of the system we say we want to replace.