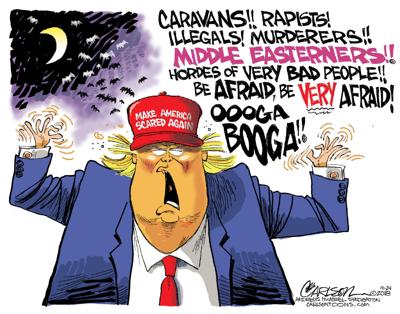 Take the migrant caravan, for example. At a Houston rally on Sunday, Trump called it “an assault on our country.” Thousands of people making their way from Honduras, Guatemala and El Salvador are fleeing violence, poverty and desperation, seeking refuge and asylum in the United States and Mexico. In a tweet on Monday, Trump claimed “Criminals and unknown Middle Easterners are mixed in.” When challenged by a reporter for evidence, he flippantly replied, “There’s no proof of anything.”

A real threat that knows no borders is climate change. Hurricane Michael roared across the warming waters of the Gulf of Mexico and tore into the Florida Panhandle two weeks ago. The town of Mexico Beach was practically wiped off the map.

Fifteen miles farther west along the coast is Tyndall Air Force Base, home of a fleet of 55 F-22 stealth fighters. Before Hurricane Michael leveled the base, at least 33 of these jets were flown to safety. But as Pulitzer Prize-winning journalist Dave Philipps reported, at least 17 of the planes, costing $339 million each, were likely left behind and possibly destroyed. Climate scientists point out that while no individual storm can be blamed on climate change, global warming increases their frequency and intensity. Hurricane Michael was the first recorded Category 4 hurricane to hit the Florida Panhandle, and was among the top three strongest hurricanes ever to hit the U.S. While Pentagon reports identify climate change as a major threat to national security in the 21st century, Trump calls it a hoax perpetrated by China to hurt the U.S. economy.

“To abandon facts is to abandon freedom,” writes Yale historian Timothy Snyder in his book “On Tyranny.” In the past few weeks, nothing illustrated this better than the murder of Jamal Khashoggi, Washington Post columnist and critic of the Saudi monarchy. On Oct. 2, Khashoggi walked into the Saudi Consulate in Istanbul and never came out. The Saudi government lied, saying he had left soon after. Reports almost immediately surfaced that Saudi Arabia had dispatched a 15-man “kill team,” which tortured, killed and dismembered Khashoggi in the consulate. Rather than denounce the murder immediately, Trump declared he would await Saudi Arabia’s investigation of itself, but would not cut record weapons sales to the kingdom. Saudi Arabia is waging a war on Yemen, and its relentless, U.S.-backed bombing has driven at least half of the Yemeni population to the brink of famine. The United Nations has declared Yemen to be the greatest humanitarian catastrophe on the planet today.

In the midst of the Khashoggi horror, President Trump held a rally in Montana praising a congressmember who pleaded guilty to criminally assaulting a reporter. At the campaign event, Trump hailed Congressmember Greg Gianforte, saying, “Any guy that can do a body slam, he’s my kind of … guy.” During his 2016 campaign, Gianforte body-slammed Guardian reporter Ben Jacobs.

To the shock of many, at another rally this week, Trump officially declared himself a nationalist — a label long associated with white supremacy and Nazism. “You know, they have a word — it’s sort of became old-fashioned — it’s called a nationalist. And I say, really, we’re not supposed to use that word. You know what I am? I’m a nationalist, OK? I’m a nationalist. Nationalist.” Desperate for Republicans to maintain their control of Congress, Trump continues to unleash the dark, divisive and destructive forces of racism.

All of this has taken place in the month of October. Add one more dangerous move by Trump, just this week: On Saturday, he announced he is pulling the United States out of the Intermediate-Range Nuclear Forces Treaty, signed by President Ronald Reagan and Mikhail Gorbachev in 1987. The INF banned all nuclear and non-nuclear missiles with short and medium ranges. Many fear this could stoke a new arms race with Russia, further destabilizing the world.

As Trump campaigns around the country, he gins up fears of foreign enemies attacking the United States. But he has shown again and again, through his words and deeds, that the greatest threat to U.S. national security is Trump himself.

Amy Goodman is the host of “Democracy Now!,” a daily international TV/radio news hour airing on more than 1,400 stations. She is the co-author, with Denis Moynihan and David Goodman, of the New York Times best-seller “Democracy Now!: 20 Years Covering the Movements Changing America.”