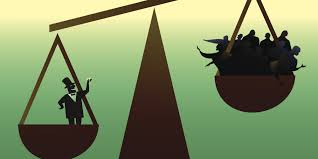 In addition to padding the bottom lines of America’s largest corporations by cutting their taxes and eliminating scores of longstanding regulations, President Donald Trump is also protecting major companies’ profits by refusing to punish them for ripping off consumers and trampling federal rules that safeguard the planet.

That is the central conclusion of a new Public Citizen analysis out Wednesday, which finds that corporate America has largely been exempt from Trump’s so-called “law-and-order” agenda. Titled Corporate Impunity (pdf), the report shows that enforcement actions carried out by major government agencies declined drastically during Trump’s first year in the White House.

“When it comes to large corporations, the supposedly ‘tough-on-crime’ Trump administration is undertaking an epic retreat from law enforcement—slashing fines, declining to bring cases against corporate wrongdoers, and cutting enforcement programs,” Public Citizen president Robert Weissman said in a statement on Wednesday.

“The message to big business couldn’t be more clear,” Weissman added. “Feel free to run roughshod over rules that protect the air we breathe, the water we drink, and the food we eat, as well as ensure the safety of the cars we drive and protect us against bank rip-offs and consumer fraud.”

According to Public Citizen, the largest drop in enforcement actions came at the Environmental Protection Agency (EPA), which is currently headed by former coal lobbyist Andrew Wheeler after previous agency chief Scott Pruitt resigned amid an ever-growing mountain of scandals.

The decline in penalties leveled by other White House agencies has been similarly striking.

Trump’s Department of Justice (DOJ), for instance, imposed $4.9 billion in penalties against major corporations for violating the law. In contrast, during the last year of the Obama administration—which could hardly be described as tough on corporate crime—the DOJ imposed $51.5 billion in fines against businesses.

“The greedy leader sets the pace,” noted legal scholar Jennifer Taub in response to Public Citizen’s figures. “Under the Trump doctrine, it’s corruption without accountability all the way down.”

Because the Trump administration has demonstrated that it is not interested in holding corporations accountable for defrauding consumers and wrecking the environment, Public Citizen argues in its report that we can expect an even larger wave of corporate crime in the near future.

“If the chances of being prosecuted for lawbreaking drop and the penalties when caught are slight, we should expect a surge in corporate wrongdoing,” the analysis notes. “That means more workers needlessly injured and killed on the job. It means more consumers ripped off by predatory lenders… It also means a greatly increased chance of corporate catastrophes, on the scale of the BP Gulf oil disaster and the 2008 financial crash, both of which can be traced directly to regulatory enforcement failures.”