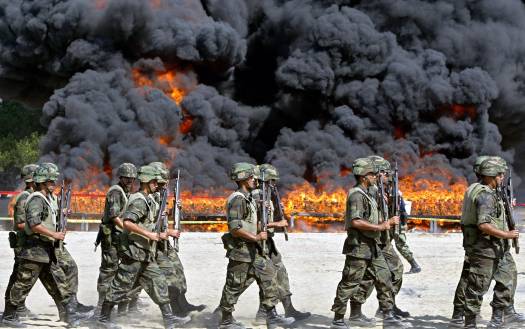 (Note : This post is an excerpt from  A Nation Unmade by War, which is personal portrait of our increasingly mad world. )

As I was putting the finishing touches on my new book, the Costs of War Project at Brown University’s Watson Institute published an estimate of the taxpayer dollars that will have gone into America’s war on terror from September 12, 2001, through fiscal year 2018. That figure: a cool $5.6 trillion (including the future costs of caring for our war vets). On average, that’s at least $23,386 per taxpayer.

Keep in mind that such figures, however eye-popping, are only the dollar costs of our wars. They don’t, for instance, include the psychic costs to the Americans mangled in one way or another in those never-ending conflicts. They don’t include the costs to this country’s infrastructure, which has been crumbling while taxpayer dollars flow copiously and in a remarkably — in these years, almost uniquely — bipartisan fashion into what’s still laughably called “national security.” That’s not, of course, what would make most of us more secure, but what would make them — the denizens of the national security state — ever more secure in Washington and elsewhere. We’re talking about the Pentagon, the Department of Homeland Security, the U.S. nuclear complex, and the rest of that state-within-a-state, including its many intelligence agencies and the warrior corporations that have, by now, been fused into that vast and vastly profitable interlocking structure

In reality, the costs of America’s wars, still spreading in the Trump era, are incalculable. Just look at photos of the cities of Ramadi or Mosul in Iraq, Raqqa or Aleppo in Syria, Sirte in Libya, or Marawiin the southern Philippines, all in ruins in the wake of the conflicts Washington set off in the post–9/11 years, and try to put a price on them. Those views of mile upon mile of rubble, often without a building still standing untouched, should take anyone’s breath away. Some of those cities may never be fully rebuilt.

And how could you even begin to put a dollars-and-cents value on the larger human costs of those wars: the hundreds of thousands of dead? The tens of millions of people displaced in their own countries or sent as refugees fleeing across any border in sight? How could you factor in the way those masses of uprooted peoples of the Greater Middle East and Africa are unsettling other parts of the planet? Their presence (or more accurately a growing fear of it) has, for instance, helped fuel an expanding set of right-wing “populist” movements that threaten to tear Europe apart. And who could forget the role that those refugees — or at least fantasy versions of them — played in Donald Trump’s full-throated, successful pitch for the presidency? What, in the end, might be the cost of that?

Opening the Gates of Hell

America’s never-ending twenty-first-century conflicts were triggered by the decision of George W. Bush and his top officials to instantly define their response to attacks on the Pentagon and the World Trade Center by a tiny group of jihadis as a “war”; then to proclaim it nothing short of a “Global War on Terror”; and finally to invade and occupy first Afghanistan and then Iraq, with dreams of dominating the Greater Middle East — and ultimately the planet — as no other imperial power had ever done.

Their overwrought geopolitical fantasies and their sense that the U.S. military was a force capable of accomplishing anything they willed it to do launched a process that would cost this world of ours in ways that no one will ever be able to calculate. Who, for instance, could begin to put a price on the futures of the children whose lives, in the aftermath of those decisions, would be twisted and shrunk in ways frightening even to imagine? Who could tote up what it means for so many millions of this planet’s young to be deprived of homes, parents, educations — of anything, in fact, approximating the sort of stability that might lead to a future worth imagining?

Though few may remember it, I’ve never forgotten the 2002 warning issued by Amr Moussa, then head of the Arab League. An invasion of Iraq would, he predicted that September, “open the gates of hell.” Two years later, in the wake of the actual invasion and the U.S. occupation of that country, he a

ltered his comment slightly. “The gates of hell,” he said, “are open in Iraq.”

His assessment has proven unbearably prescient — and one not only applicable to Iraq. Fourteen years after that invasion, we should all now be in some kind of mourning for a world that won’t ever be. It wasn’t just the US military that, in the spring of 2003, passed through those gates to hell. In our own way, we all did. Otherwise, Donald Trump wouldn’t have become president.

I don’t claim to be an expert on hell. I have no idea exactly what circle of it we’re now in, but I do know one thing: we are there.

The Infrastructure of a Garrison State

If I could bring my parents back from the dead right now, I know that this country in its present state would boggle their minds. They wouldn’t recognize it. If I were to tell them, for instance, that just three men — Bill Gates, Jeff Bezos, and Warren Buffett — now possess as much wealth as the bottom half of the US population, of 160 million Americans, they would never believe me.

How, for instance, could I begin to explain to them the ways in which, in these years, money flowed ever upward into the pockets of the immensely wealthy and then down again into what became one-percent elections that would finally ensconce a billionaire and his family in the White House? How would I explain to them that, while leading congressional Democrats and Republicans couldn’t say often enough that this country was uniquely greater than any that ever existed, none of them could find the funds — some $5.6 trillion for starters — necessary for our roads, dams, bridges, tunnels, and other crucial infrastructure? This on a planet where what the news likes to call “extreme weather” is increasingly wreaking havoc on that same infrastructure.

My parents wouldn’t have thought such things possible. Not in America. And somehow I’d have to explain to them that they had returned to a nation which, though few Americans realize it, has increasingly been unmade by war — by the conflicts Washington’s war on terror triggered that have now morphed into the wars of so many and have, in the process, changed us.

Such conflicts on the global frontiers have a tendency to come home in ways that can be hard to track or pin down. After all, unlike those cities in the Greater Middle East, ours aren’t yet in ruins — though some of them may be heading in that direction, even if in slow motion. This country is, at least theoretically, still near the height of its imperial power, still the wealthiest nation on the planet. And yet it should be clear enough by now that we’ve crippled not just other nations but ourselves in ways that I suspect — though I’ve tried over these years to absorb and record them as best I could — we can still barely see or grasp.

In my new book, A Nation Unmade by War, the focus is on a country increasingly unsettled and transformed by spreading wars to which most of its citizens were, at best, only half paying attention. Certainly, Trump’s election was a sign of how an American sense of decline had already come home to roost in the era of the rise of the national security state (and little else).

Though it’s not something normally said here, to my mind President Trump should be considered part of the costs of those wars come home. Without the invasions of Afghanistan and Iraq and what followed, I doubt he would have been imaginable as anything but the host of a reality TV show or the owner of a series of failed casinos. Nor would the garrison-state version of Washington he now occupies be conceivable, nor the generals of our disastrous wars whom he’s surrounded himself with, nor the growth of a surveillance state that would have staggered George Orwell.

The Makings of a Blowback Machine

It took Donald Trump — give him credit where it’s due — to make us begin to grasp that we were living in a different and devolving world. And none of this would have been imaginable if, in the aftermath of 9/11, George W. Bush, Dick Cheney &amp; Co. hadn’t felt the urge to launch the wars that led us through those gates of hell. Their soaring geopolitical dreams of global domination proved to be nightmares of the first order. They imagined a planet unlike any in the previous half millennium of imperial history, in which a single power would basically dominate everything until the end of time. They imagined, that is, the sort of world that, in Hollywood, had been associated only with the most malign of evil characters.

And here was the result of their conceptual overreach: never, it could be argued, has a great power still in its imperial prime proven quite so incapable of applying its military and political might in a way that would advance its aims. It’s a strange fact of this century that the U.S. military has been deployed across vast swaths of the planet and somehow, again and again, has found itself overmatched by underwhelming enemy forces and incapable of producing any results other than destruction and further fragmentation. And all of this occurred at the moment when the planet most needed a new kind of knitting together, at the moment when humanity’s future was at stake in ways previously unimaginable, thanks to its still-increasing use of fossil fuels.

In the end, the last empire may prove to be an empire of nothing at all — a grim possibility which has been a focus of TomDispatch, the website I’ve run since November 2002. Of course, when you write pieces every couple of weeks for years on end, it would be surprising if you didn’t repeat yourself. The real repetitiousness, however, wasn’t at TomDispatch. It was in Washington. The only thing our leaders and generals have seemed capable of doing, starting from the day after the 9/11 attacks, is more or less the same thing with the same dismal results, again and again.

The U.S. military and the national security state that those wars emboldened have become, in effect — and with a bow to the late Chalmers Johnson (a TomDispatch stalwart and a man who knew the gates of hell when he saw them) — a staggeringly well-funded blowback machine. In all these years, while three administrations pursued the spreading war on terror, America’s conflicts in distant lands were largely afterthoughts to its citizenry. Despite the largest demonstrations in history aimed at stopping a war before it began, once the invasion of Iraq occurred, the protests died out and, ever since, Americans have generally ignored their country’s wars, even as the blowback began. Someday, they will have no choice but to pay attention.