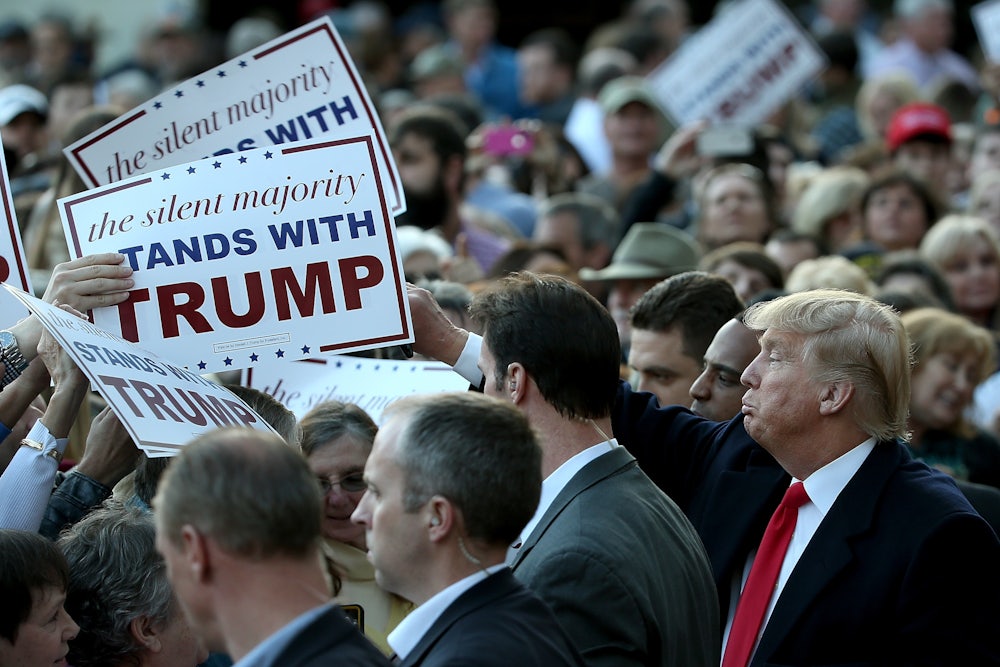 There are two consistent themes about the American right-wing in the Age of Obama. First, racism and conservatism is now one and the same thing. Second, the Republican Party is the United States’ largest white identity organization. I am not the only person to have made such observations.

Of course, Republicans and conservatives find these twin facts offensive and unbelievable. They hold onto their founding myth of Lincoln and “Great Emancipator” while simultaneously being dependent on voters from the former Confederacy for power—states that still fly and honor the American swastika, a rebel flag of treason and anti-black hatred.

Despite their protests, the evidence is overwhelming.

The ascendance of Donald Trump and his coronation as the presumed 2016 Republican presidential candidate is the logical outcome of a several decades-long pattern of racism, nativism, and bigotry by the American right-wing and its news entertainment disinformation machine.

For example, in response to the triumphs of the black freedom struggle and the civil rights movement, the Republican Party has relied on the much discussed “Southern Strategy.” Lee Atwater, master Republican strategist and mentor to Karl Rove explained this approach as:

You start out in 1954 by saying, “N****r, n****r, n****r.” By 1968 you can’t say “n****r”—that hurts you, backfires. So you say stuff like, uh, forced busing, states’ rights, and all that stuff, and you’re getting so abstract. Now, you’re talking about cutting taxes, and all these things you’re talking about are totally economic things and a byproduct of them is, blacks get hurt worse than whites.… “We want to cut this,” is much more abstract than even the busing thing, uh, and a hell of a lot more abstract than “N****r, n****r.”

Ronald Reagan and other Republican elites would leverage Atwater’s approach to winning white voters and elections. To point, Reagan began his 1980 presidential campaign in Philadelphia, Mississippi, the locale where American civil rights freedom fighters Andrew Goodman, Michael Schwerner and James Chaney were killed by white racial terrorists. In that speech, Reagan signaled to the ghosts of Jim and Jane Crow and the neo-Confederacy by stating his support for “states’ rights.”

Reagan would continue to use overt and coded racial appeals to gin up white support through his references to a “lazy,” “violent” and “parasitic” class of black Americans who he described as “welfare queens” and “strapping bucks.” George Bush would continue with the Southern Strategy when he summoned up white racist stereotypes and fears of “the black beast rapist” in the form of Willie Horton during the 1988 presidential election.

The Age of Obama witnessed an explosion of anti-black racism by the Republican Party and conservatives en masse. Birtherism, the rise of the Tea Party, the use of antebellum language (which was used to defend the Southern slaveocracy) such as “secession” and “nullification”, both overt and coded racist invective by Republican officials and news media, and a pattern of disrespect towards both the idea and literal personhood of Barack Obama as the United States’ first black president has been the norm. This deluge of anti-black animus towards Barack Obama does not exist in a separate universe outside of American society: it has real impact on the values and behavior of citizens.

To wit: in discussing his recent work on racial attitudes and political polarization, Professor Michael Tesler has noted how:

In all, Barack Obama’s presidency has been so disruptive to the white right-wing political imagination that it has resurrected a type of overt racism which was thought to be largely vanquished from American public life.

In a recent survey by the Pew Research Center, 66 percent of Republican and Republican-inclined respondents want to return to the “good old days.. This number is higher for Trump backers. It is important to note that this era was one of Jim and Jane Crow anti-black racism, legal sexism, and unapologetic discrimination against gays and lesbians. This yearning for a return to a fictive golden age of white male Christian domination over American social and political life is reflected in other work that shows how white people are much more pessimistic about their futures than Hispanics and African-Americans.

Donald Trump is not a political genius. He understands what the Republican base yearns for and has been trained to believe–like a sociopolitical version of Pavlov’s dog–by its leaders.

Trump says that Muslims should be banned from the United States because Republican voters respond to such hatred and intolerance.

Trump lies that undocumented Hispanic and Latino immigrants are rapists and killers who want to attack white women because Republican voters find such rhetoric compelling.

Trump uses social media to circulate white supremacist talking points about “black crime” because modern conservatives nurtured on “law and order” politics believe that African-Americans are out of control “thugs” possessed of “bad culture” who live to prey on innocent and vulnerable white people.

Trump talks about China “raping” the United States because this arouses anger and fear of a new “yellow peril” where the manhood and honor of (white) America is sacrificed to a “sneaky” and “scheming” “Oriental” horde who twist their Fu Manchu mustaches and seduce white women in opium dens while simultaneously negotiating multibillion dollar trade deals.

And perhaps most damning, Donald Trump has been endorsed by neo-Nazis, white nationalists, and the Ku Klux Klan: he has been reluctant to publicly reject and denounce their support.

The corporate news media has aided and abetted “Trumpmania” by normalizing his racist, nativist and bigoted behavior. In response to Trump’s crucial win in last week’s Indiana primary, Slate’s Isaac Chotiner skewered this failure of journalistic integrity and responsibility among the TV news chattering class as:

On TV Tuesday night, there was hardly a whimper. CNN, MSNBC, and Fox contented themselves with bright chatter about Ted Cruz’s hurt feelings, about Donald Trump’s political skill, about the feckless, pathetic Republican establishment. None of the commentators I saw mentioned the import of what was happening. Large chunks of the media have spent so long domesticating Trump that his victory no longer appeared momentous. He is the new normal….There was little talk of ideology, or racism, or bigotry, or fascist appeals. Instead, the conversation was about process; Trump had been fit into the usual rhythms of an election season. The closest thing I heard to open-mouthed shock came from Rachel Maddow, who wondered, correctly, why out of 330 million people the Republican Party had chosen this particular reality-television star.

Elizabeth Bathory was a 16th century Hungarian countess who killed hundreds of young virgin girls and then bathed in their blood with the hope that it would maintain her beauty. Since at least the end of the civil rights movement, the Republican Party and movement conservatives have followed a similar “beauty” regimen. Instead of the blood of female virgins, they have washed themselves in racism and bigotry in order to buoy their political vitality.

Donald Trump decided to move this political ritual out of the shadows and into the light of prime time television and the 24/7 news cycle. Trump, with his background in professional wrestling and reality TV simply took what has always been implied by the American Right-wing and made it obvious.

The question now becomes, will Trump’s version of Elizabeth Bathory be enough to defeat Hillary Clinton and win the White House in November 2016?